The Bredhauer and Longland Reports 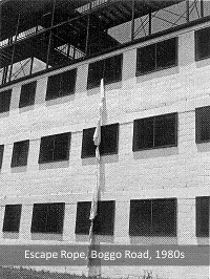 The obviously worsening security situation at Boggo Road prompted far-reaching official responses. In 1974 the Queensland Government commissioned a review following a number of high profile escapes from Boggo Road, in particular that of Russell and Bateman. This review was led by Public Service Board Commissioner Pat Bredhauer. Among other things, his report recommended changes to the design of the prison, including more watch towers, fencing, floodlighting and CCTV. There were also to be changes to the management of the prison, much to the outrage of serving superintendent Roy Stephenson.

Another major review was conducted by Sir David Longland after the November 1983 riots at Boggo Road. Prisoners had protested about inadequate food and 'harsh treatment' and they took over the Industrial Division for about 24 hours and damaged 129 cells, which were left uninhabitable for almost six months.

Longlands looked into management practices at the prison and his report provided a performance benchmark for all areas of the prison system. During the following year the construction of theee new prisons was approved.
Despite substantial changes being made at Boggo Road during the 1970s-80s, the security problems there not only persisted but appeared to worsen, partially as a result of a much more determined prisoner resistance. This paved the way for another review, and in terms of its impact on Boggo Road, the 'Kennedy Report' of 1988 proved to be the most far-reaching of them all.