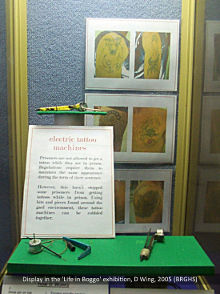 The No.2 Division at Boggo Road opened as a historical site in October 1992, following the closure of the neighbouring No.1 Division. The first curator was Faye Smith, and former prison officer Don Walters later took over the job under the supervision of the Environmental Protection Agency. During the first ten years a significant collection of Boggo Road-related artefacts was collected and catalogued.

The National Trust and a group called the 'Friends of Boggo Road' also played an important role in maintaining and promoting the site during the 1990s by organising open days and producing site interpretation material such as booklets, CD-ROMs and displays.

By the late 1990s several ex-officers, including John Banks, took the lead role in managing Boggo Road and conducting guided tours. Eventually they formed the not-for-profit Boggo Road Gaol Museum (BRGM), and until 2003 the BRGM was able to donate thousands of dollars to various charities each year.

Without these original volunteers turning up on a near-daily basis, the prison gates would have been closed to the public. It was only their hard work and amazing dedication that enabled the public to visit and use the site.

Occasional school tours began in 1992 and became increasingly popular over time, getting to the point where tens of thousands of Queensland schoolchildren were visiting the museum each year. The place also proved extremely popular with ‘Seniors’ groups. Apart from day tours, the site also hosted peripheral activities such as sleepovers and, like many other prison sites around the world, the obligatory 'ghost tours', which had free access and office space at the site. The prison also became a popular venue for functions such as birthday parties, workplace end-of-year functions, corporate training days, charity events, and even hosted several weddings.

By 2003 the success of the BRGM was such that there were enough volunteers to form an incorporated association (the Boggo Road Gaol Historical Society) that has since reached 300 members! The BRGM closed in late 2005 when redevelopment of the surrounding land began. It is hoped that the old prison will again feature a museum after it has been refurbished and reopened circa 2016/17.