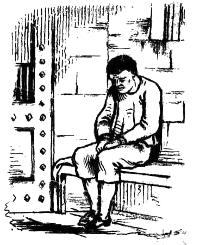 The original No.1 Division was built with two underground cells, which were used to separately confine troublesome prisoners for 24 hours or so. These cells were described in the 1980s by superintendent Roy Stephenson:

The B Wing of 1 Division also contained two ‘dark cells’, which were also underground but were better ventilated as they adjoined an external wall.

The new No.1 Division of the 1970s also had punishment cells, which became infamous as the ‘black holes’. Although these were mostly underground, they were built into sloping ground and so had external ventilation. They were, however, felt to be inhumane and were closed in 1984 under public pressure. In late 1987 the Bjelke-Petersen state government made a controversial decision to reopen the cells in order to contain Aboriginal protesters who were felt to be a threat to World Expo '88 - a story that many believe to be a politically-convenient cover. This move sparked major riots across the Boggo Road prisons. The punishment cells were closed by the state government in 1989 as they were in breach of United Nations regulations regarding the treatment of prisoners. 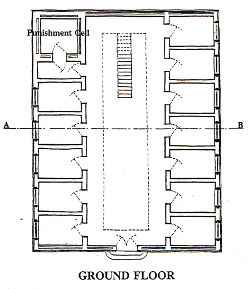 Six new punishment cells were then built into the area where No.1 and No.2 Divisions adjoined. Known as the Detention Unit, each cell here had an individual exercise yard, shower and toilet. Ironically, these were much roomier and more 'well appointed' than the regular cells in No.2 Division.

No underground cells were built in the 1903 Female Division, although two blocks each had a ground-floor 'punishment cell', which were two cells joined together to create a cell that could only be entered via a small room (see plan above). These punishment cells were converted to regular cells in 1950, so that each floor then had 14 cells.

'Find the Buttons'
Life in the punishment cells was extremely tedious. No conversation or tobacco was allowed, and the diet was strictly bread and water. For many the only form of entertainment was a game called 'Find the Buttons', which involved throwing a button into the darkness and then looking for it. It seems that 'Find the Buttons' was played in dark cells around the world throughout the 20th century.


‘The rules for this were to remove all the buttons from his clothing, throw them around the cell and then locate them in the darkness. When all had been found, they would be thrown away again and relocated. This would be repeated many times until the term of punishment had expired.’ (Roy Stephenson, Nor Iron Bars a Cage, 1982)

‘Well, when I’d go in the hole, what I used to do is I’d tear a button off my coverall, flip it up in the air, then I’d turn around in circles, then I’d get down on my hands and knees and I’d hunt for that button. When I found the, button... stand up and do it again.’Ex-inmate of Alcatraz (Alcatraz Cellhouse Tour Book)

‘At other times I played a game with a button torn from my long johns. I threw it against a wall at an angle so it would bounce. Then I would make a ritualised search, using one finger, poking it down every few inches rather than sweeping the floor with my hand. That would have been too easy.’ (Edward Bunker, Education of a Felon, 2000)

‘Give a man fourteen days, seven days, or even forty-eight hours of the eternal blackness of a punishment cell, with sixteen ounces of dry bread! Let him drag out the moments of his unseeing anguish with nothing to do but to tear a button from his branded garb and toss it from him in order that he might searchingly grope to find it - do something to distract, something to occupy his mind, something to keep away the horrible fear of madness which such inhuman treatment assuredly create!’ (Vance Marshall, The World of the Living Dead, 1918)