1973: The Mysterious Escape of Fingers & Bluey

It was very difficult to escape from Boggo Road’s 2 Division, thanks to the high red-bricked walls and internal layout. A handful of prisoners did manage to get out of there by various means over the decades, but the modern 1 Division, built in the 1970s, proved to be so much leakier. Instead of having cellblocks on grounds within a perimeter wall, as was the case with the older prison structures, the cellblocks in the new prison were the perimeter wall. It was only in later years that high wire fences were erected outside that wall.

A long series of high-profile escapes from 1 Division during the 1980s helped to bring on the eventual closure of Boggo Road (and the demolition of 1 Division). In most cases it was quite obvious how the breakout was effected, but every once in a while there was a head-scratcher. The escape of Bateman and Russell in June 1973 was one of those mysteries. 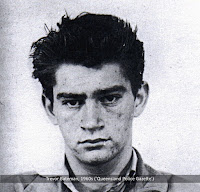 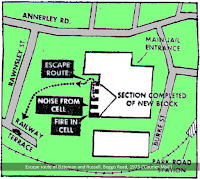 They got out of Boggo Road following a cell fire in C Wing, the No.1 Division maximum-security block. There was also a small disturbance in the wing before the fire was extinguished. It was only on the next morning, when officers were unlocking the cells, that they realised that convicted murderer Ronald Russell, aged 29, and Trevor Bateman, a 28-year-old armed robber, had broken out. The escapees had typically ironic nicknames. Red-haired Russell was known as ‘Bluey’, while ‘Fingers’ Bateman was missing almost all the fingers from his right hand.

Their escape route seemed quite clear. The bars in the skylight of their cell had been spread apart, and makeshift ropes of blankets and bedsheets hung from the end of the block.

Despite this trail of evidence, even today it is unclear as to how they got out of C Wing because there are three versions of the story. An early theory adopted by the police and prison authorities suggested that they had outside help. As the front-page headline in the next day’s Courier-Mail read, ‘ACCOMPLICE BROKE IN, FREED TWO FROM JAIL’. The story went something like this:
This version of events best suited the prison authorities as it would make the escape from the new maximum-security wing somewhat less embarrassing for them.

Despite this, Bateman later maintained that he and Russell had received no outside help. He claimed that the fire was unrelated to the escape and had actually delayed it. He also claimed that they had used bar spreaders to get out. This was a small wooden block, 90mm long and 40mm square, with a hexagon nut set in one end with a bolt running through it. Placed tightly between bars, turning the nut would slowly force them apart.

This story suited the escapees because it would protect anyone who may have helped them in the escape. However, a surprising third theory was offered up by Roy Stephenson, who was superintendent of Boggo Road at the time. He claimed that:
Stephenson later told Russell that he did not believe they had got out with the bar spreaders. Russell laughed and said, “I will tell you how we really got out one of these days. You are closer to the truth than you think!”

This 'inside help' version would have suited Stephenson because he was locked in a much broader power struggle with the people who conducted the inquiry into the escape. He resigned shortly afterwards.

Bateman was recaptured two days later, drinking a chocolate malt in a Sandgate milk bar, still wearing his blue prison uniform. Russell was out for 35 days before being apprehended near Lake Manchester, northwest of Ipswich. He had been hiding in a pumping shed stocked with tins of food, and was in a dishevelled condition.

The Bateman and Russell escape did lead to changes at Boggo Road, most immediately the commencement of armed patrols around the perimeter. Acting Premier Gordon Chalk appointed Public Service Board Commissioner Pat Bredhauer to head up an enquiry into the escape. The resulting ‘Bredhauer Report’ recommended changes to the design (more watch towers, fencing, floodlighting and CCTV) and the management of the prison, much to the chagrin of Stephenson who recalled the entire episode with some venom in his memoirs Nor Iron Bars a Cage.

So which was it? Did they have outside help, inside help, or did they work alone? Although Roy Stephenson did put forward a good argument for ‘inside help’, no evidence has been unearthed to back up any of the theories. This lack of evidence suggests that Bateman and Russell did indeed work alone. They had worked together in the prison tailor shop, so would have had plenty of time and opportunity for planning.

Back to Escapes From Boggo Road
Back to the History Vault