In 1987, one hundred years after the landmark 'Inquiry into Gaol Management' of 1887, the Queensland prison system - and Boggo Road in particular - was a mess. The newspapers lampooned the state of affairs at Boggo Road, and the Corrective Services chairman said:

'Boggo Road - which is 106 years old - is not a good design with a wall and circular ovals. These jails are being demolished everywhere else around the world or being promoted as tourist ventures.' 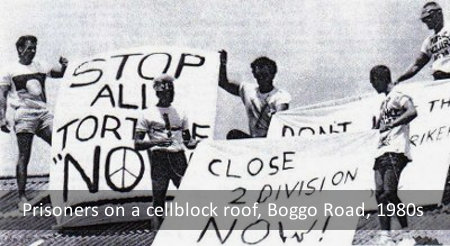 The ‘Commission of Review into Corrective Services in Queensland’ was launched to find out what was going wrong and how it could be fixed. Written by Commissioner Jim Kennedy, the final report became known as the ‘Kennedy Report’ and it spelled the end for Boggo Road.

Findings of the review included, 'Boggo Road Prison is a relic of the last century and is hopelessly inadequate to provide corrective services today', and 'Security in Queensland prisons in lax and needs upgrading.'

In addition, the report noted that the 'Prisons Act' was outdated, drugs were entering prisons due to lax security, corruption was rife, officer training was poor, prisoners were not being rehabilitated, and the system was underfunded. The Commission even heard that there was a counterfeit money operation at Boggo Road.

It was recommended (controversially, in some circles) that 'H.M. Prison Brisbane be demolished by the end of 1991…', and that 'Prison labour be used to demolish No.2 Division under supervision; and expressions of interest be called for the removal and preservation of the buildings.'


'We, as a society, should be looking to provide a system which is fair and just, in which vulnerable people are not going to be assaulted or raped, in which Aborigines are not confined in unsanitary conditions of eighty to ninety in a dormitory as in Townsville Prison, and in which every prisoner who wishes to work can be provided with a productive job and in which those seeking to remedy their educational, moral and behavioural problems are able to find positive opportunities and guidance and in which staff have a safe and rewarding environment to work. We certainly do not have such a prison system at the moment. Far from it.'

In response to the report, No.2 Division was decommissioned and closed in November 1989, with the inmates being transferred to other prisons around Queensland. No.2 Division, the prison that had been held up as a model for all others when it first opened, had become a symbol of all that was wrong with the Queensland prison system.