The 1868 Report into Prison Discipline

Queensland was still less than ten years old in 1868, but its prison system had grown rapidly from a single prison in Brisbane to four around the new colony. Multiple issues had already emerged within that system, including inefficient administration, and so parliament appointed a Select Committee to investigate the problems and come up with solutions.

The following account of the resulting report is adapted from the Rockhampton Bulletin, 20 February 1868:

'The Select Committee appointed by the Legislative Assembly, “to inquire into the internal management and discipline of the prisons of the colony, and the construction and suitability of the gaols and lockups,” have laid their report before the House.

The Committee confined their inquiry to four principal questions: 1st, whether the gaols of the colony afforded sufficient accommodation far the criminals confined in them, and means for properly classifying and otherwise maintaining strict discipline among the inmates; 2nd, whether the prisoners sentenced to “hard labour” were really so employed, and if so, in such a manner as to return anything to the colonial revenue for the cost of their maintenance; 3rd, whether it would not be within the range of possibility to utilise prison labour to a greater extent than at present; and 4th, whether some method might not be adopted of encouraging reformation among the prisoners by holding out the hope of a remission of a portion of the sentence at the end of their term, such remission to be in proportion to the length of the sentence and the good behaviour of the confine; and as a still further inducement, by bestowing a small gratuity upon the day of release proportionate in each case to the earnings of the prisoner.


Gallery: Plans of Queensland prisons from the 1868 report (click to enlarge images) 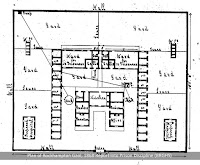 Very interesting evidence was given on the chief points of the inquiry, and on other matters connected with prison discipline. The report states as the result of the inquiry, that there is abundant proof of the insufficiency of the accommodation, as far as the classification of prisoners and the maintenance of strict discipline are concerned. The Committee visited the Brisbane Gaol and the Penal Establishment at St Helena. They describe the former “as evidently unsuited for a climate like that of Queensland, in every respect.” The mode of ventilation is imperfect, and admits of verbal communication between the prisoners. The instruction of the gaol renders any classification impossible. The vilest and apparently the most irreclaimable confines are herded together with those whom it would be a charity to separate from their more accomplished companions in crime. This gaol has neither hospital, workshops, nor punishment cells. The outlay for this gaol for the year 1866, was £1568 8s. 9d; the average number of prisoners during the year, was 137, and the cost per head to the state, £45 8s. 1d.

The Toowoomba Gaol, from the want of accommodation, renders any classification impossible. A noticeable fact in connection with this establishment is the apparently excessive cost of maintenance. During the year 1863, the outlay was £1475 7s. 2d.; the average number of prisoners was thirty two, and the cost per head, £32 19s. 3d - being more than £7 per head above Brisbane, and more than £8 per head above Rockhampton. The only evidence taken with regard to the Rockhampton Gaol, was that of the Colonial Architect. He stated that owing to the insufficiency of the money voted for the purpose, the gaol was “altogether un suited for the purposes to which it is devoted.” The site originally marked out and afterwards abandoned, would have more suited for the purposes. The outlay for this gaol in 1866, was £1560 5s. In 1866, the average number of prisoners was thirty-eight, and the cost per head was £14 10s. 8¾d.

The committee recommend additions to the various gaols, on the radiating corridor principle; and plans are annexed to the report showing the accommodation now afforded, and the proposed additions. In the present Rockhampton gaol, there is accommodation only for twenty-six prisoners, and with extensions, for fifty. In the proposed new gaol on Athelstone Range, there is accommodation, if buildings are of two storeys, for 152 prisoners; if of three storeys, for 221 prisoners. The area would include over two acres and a-half; and the estimated cost £45,000, if the plan were carried out in its entirety. The report comments on the insufficient areas of all the gaol reserves. The whole reserve in Brisbane is 9½ acres; the area within the present walls being only la. 3r. 27p. The reserve for Toowoomba is not more than 2a 3p.; and in Rockhampton the buildings do not occupy more than 3r. 3l.5p. within the walls.

Our prisoners are well fed, and Dr. Hobbs stated in his evidence that “most of the cases of sickness which came under his notice at the gaol arose from derangement of the digestive organs from want of exercise, and from the superabundance of food the prisoners were allowed.”

The committee pronounce the “hard labour” sentences as implying leniency rather than extra severity. The result of the present system is to keep in perfect idleness the worst class of criminals. Cooking and whitewashing are the hardest labour confines are put to. Both as regards men and women, the hard labour is a farce; and this remark applies with equal force to the Rockhampton and Toowoomba gaols.

With regard to the utilisation of prison labour, the committee state that there are manifold obstacles at present to any organised system. Without proper classification little could be done; and the present accommodation renders this impossible. The gaols are without the requisite buildings and workshops. Such employments as stone-breaking, stone-cutting, shoemaking; and tailoring, if accommodation permitted, could be carried on within the prisons. The committee recommend the introduction of mat making, and also that the prisoners should be employed in making up the clothing required for the penal and other Government establishments; and suggested that the immunity from labour now enjoyed by the worst of our felon class offering a premium for the commission of crime, in the absence of remunerative labour, the “shot-drill” or other methods of employment adopted in military prisons, should be availed of in this colony.

The Committee recommend the adoption of the system of mitigation of sentences, an rewards for industry and good conduct, and also that a portion of the prisoner's earnings, determined, according to the “mark” system, should be handed to him at the time of his release.

The “lash” has been resorted to but in but “few instances,” and then its application was most effectual. Only one instance occurred in Brisbane Gaol during fifteen months. The committee recommend the immediate construction of “punishment cells,” in the central gaol, with all the punitive appliances of the silent system - total isolation, total darkness, and sufficient ventilation.

When the Committee visited the penal establishment at St. Helena there were seventy-nine prisoners there, chiefly employed in the erection of necessary buildings, and clearing the island for purposes of cultivation. The prisoners wore remarkably healthy, the only complaint being that they had to work (harder than when in gaol. The report concludes with a recommendation that the House should appoint a commission to draw up regulations, which, immediately after being approved by the Executive, should have full force and effect.'

(The Boggo Road Gaol Historical Society has a hard copy of the 1868 report in their collection.)

Back to Penology and Prisons Reports
Back to the History Vault