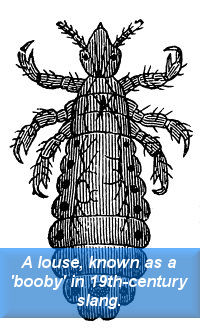 boob
Prison. Recorded at Boggo Road in 1907. ‘Boob’ is derived from children’s slang of the 19th century, when lice were called ‘boobies’. Cells were referred to as a ‘booby-hatch’ (1859+) or ‘booby-hutch’ (1720+). Terms derived from this include: boob head: A prisoner who has influence in the prison, deferred to by other prisoners.boob gun: Tattoo machine boob rat: A prisoner who constantly returns to prison. boob talk: Secret language used in prison. boob shit: Prison-issued tobacco. boob weed: Prison-issued tobacco. boob happy: A prisoner who develops mental health problems as a result of imprisonment.

cat
A passive homosexual, applied to young (and usually otherwise heterosexual) prisoners who submit to this role while in prison (1950s)

hock
A prisoner who takes the active or ‘insertor’ role in homosexual relations (1940s) This role does not necessarily indicate that the person adopting it is perceived as, or actually is, a homosexual.

lunar
One-month sentence. Also Moon. A three-moon is three months, a six-moon or sixer is six.

peter
Cell (1800s). Originated from the old slang ‘peter’, for portmanteau (a trunk or a box), the term was applied to the box-like qualities of a cell) A black peter was a punishment cell, usually a very dark one. Associated peters were cells with at least two prisoners in them. A peter thief is a prisoner who steals from others’ cells. ‘Peter’ was recorded at Boggo Road in 1907.

flea
(1940s) A prisoner who seeks to be on good terms with warders and prisoners (i.e. he hops from one to the other, like a flea).

READ MORE
Back to Prison Life Back to the History Vault