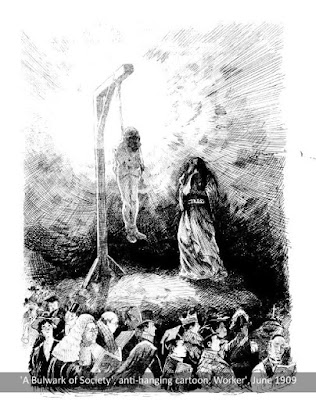 Queensland was a part of New South Wales until 1859, and subject to the laws of that colony until that time.

When the First Fleet arrived in New South Wales, there were over 200 capital crimes under British Law. The first hanging of a convict - for stealing food - took place just one month later. The bodies of executed murders were dissected afterwards, a requirement under the Murder Act 1752, a law designed to make the punishment for that crime worse than it was for people who were hanged for lesser crimes.

Hanging in Chains - the punishment of placing the dead bodies of executed prisoners in cages suspended on the side of roads - was abolished in New South Wales in 1837.

Public Hanging hanging was abolished in New South Wales in 1855, with new legislation requiring hanging to be conducted within prison grounds. The amount of privacy this afforded was dependent upon the height of the prison walls. Authorities sometimes had to drape the gallows in black cloth to prevent people watching from beyond the walls.

By 1900 the list of capital crimes in Queensland had been reduced to just four - treason, rape, murder and attempted murder.

Abolition of hanging in Queensland

Political and public support for the abolition of the death penalty grew throughout Queensland during the early 1900s. This was due to various reasons, including the controversial executions of convicted murderers Patrick Kenniff (1903) and Arthur Ross (1909) - both of whom had strong public sympathy - and the rising strength of socialist elements within the Queensland Labor Party. The abolition of capital punishment had official Labor Party support from 1910, and after the party won power in 1915 it introduced an abolition Bill.

The main arguments put forward against capital punishment at this time were:
The arguments for retaining it included:


Although the Bill failed, all death sentences after this time were commuted. Overall, there were 118 commuted death sentences during the Boggo Road era. In 1922 the Labor-controlled parliament successfully passed a Bill abolishing capital punishment, by a vote of thirty-three to thirty. Queensland had become the first part of the British Empire to abolish the death sentence, but the event passed without fanfare in the press. 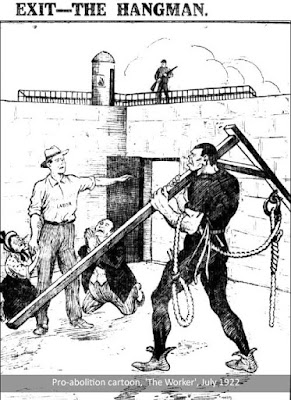 Tasmania abolished the death penalty in 1968, and the federal government did so in 1973 (which also applied to the Australian Capital Territory and the Northern Territory), followed by Victoria (1975), South Australia (1976), Western Australia (1984), and New South Wales (1985). Federal legislation passed in 2010 prohibited the reintroduction of capital punishment by any state or territory.