'A disgrace to civilisation': Scenes From Boggo Road, 1887 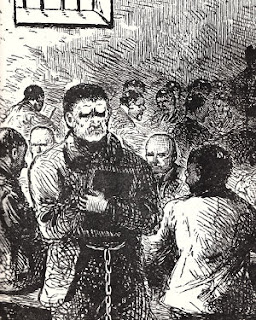 A major inquiry into the management of the Queensland prison system took place in 1887, and the final report remains one of the most fascinating documents in Queensland prison history. Barrister William Kinnaird Rose and immigration agent William Parry-Okeden travelled around the colony inspecting numerous prisons, police gaols, and lockups. They interviewed staff and inmates at length, and recorded the surprisingly frank and revealing statements they heard. Not only is their report the kind of brilliant historical document that modern, secretive governments would never publish, but it also led to the legislation of the Prisons Act 1890.

The following extracts from the report were recorded in April 1887 when Rose and Parry-Okeden visited HM Prison at Boggo Road and interviewed various prisoners about life in what was still a very new facility. What they heard about food, hygiene and medical treatment for venereal diseases left little to the imagination. The racist attitudes of the day were also on full display.

'In wet weather like this there is no place to get out of the rain, except in the bathhouse or closets. At present, and for the past ten days, we have no work to do. We are compelled to go into the yard and spend the days doing nothing if there is no ‘kapok’ to tease. We never get the same rations two days running - I mean the quantity. Sometimes the dishes in which the hominy is brought to us are half full, sometimes three quarters full, and sometimes full. On one occasion when I complained of the small ration of hominy, I was told they were rather late in the cookhouse and busy. The meat given us at dinner time is badly cooked, and so tough that it is impossible to eat it. I am an American from New York, and I have never been here before. The meat is so tough that we cannot tear it with our fingers or teeth. There are no knives and forks allowed - at least I have never seen any; and it is cut up in pieces too large to swallow whole. The dishes are generally dirty, only half-washed. The same quart-pots in which they serve out soup are used for drinking water in the cells at night, and they are always greasy.

I believe there is a regulation that every man should have a bath when admitted and once a week after; but I know men who have been here since I came here, ten weeks ago, who have not had a bath. Bathing is more the exception than the rule. It is only a fortnight since I had a towel. Before that, for eight weeks, I had to do the best I could and use my handkerchief. I asked repeatedly for a towel, and Mr Sneyd, the warder on duty, told me there were none. I kept at him every day asking for a towel, and finally I got one. The allowance of soap is not sufficient. I don’t believe we get half-an-ounce a day; the piece for the week seems only to be about two ounces.

I have never seen any disinfectants used anywhere in the gaol. The tubs and buckets put into the cells smell very badly at times. Men who are doing probation - i.e. locked up in a cell all day, with the exception of two hours for exercise - have during the day bucket at all, but an open chamber with no lid to cover it. At night time in those same cells three men have to sleep.

When I was on remand here I was not allowed to write or communicate with any of my friends. I applied to the gaoler the morning I came here on remand to be allowed to send out for dry clothes, as I had got thoroughly saturated coming here sitting on the van beside the driver. The gaoler, Captain Jekyll, said he could not allow me to write because I was on remand, but he would lend me a gaol suit.'

'In one case I was sent with two others to a cell where three Chinamen had been sleeping. Those blankets were stinking, and we did not take off our clothes. Next day, on our complaint, those Chinamen’s blankets were taken away and other dirty ones put in their place. I take a bath every morning, but for days in succession I got vermin on me from the blankets or bed. Complaining seems to be no good whatsoever. The sanitary arrangements are vile - frightful. The stench from the tubs is awful at night, and no disinfectants are used.

It frequently occurs that men in a dreadful state of venereal disease are here, and these men use the tins for cleansing purposes that the other prisoners wash in.[i] I refused to use these tins. I take a shower-bath when there is water there. Sometimes there is no water. On Wednesdays and Fridays there is no water in the shower baths in the morning. Then these men with venereal disease have to do all their poulticing and washing in the closets in the yards where other men have to go. Leeches are brought into the yard to be applied to men’s testicles. One coolie had leeches put on his testicles, and he went about the yard in the face of all the men, holding his bleeding testicles in his hands. It was the most disgusting sight that could be imagined and a disgrace to civilisation...

The hominy and the soup are served in dishes that are very dirty, and the spoons are exceedingly dirty too. There are no knives and forks; we have to ‘fist’ everything. And snarl at the meat like dogs. To put the finishing stroke on the matter, one day last week the warder said there was an order from the gaoler that any one keeping a spoon would be punished. Sometimes when we get a good spoon we would keep it, carry it about with us, so that we could keep it clean and have the same one. There is only one dipping pot for water in the yard, and that dipper has to be used alike by black, white, and yellow - Europeans, coolies, Chinamen, Polynesians, and African negroes.'

[i] One of the double-standards of the age was that women with VDs were required - under the Contagious Diseases Act 1868 - to be confined in the lock hospital, yet men with the same disease were allowed to roam free.