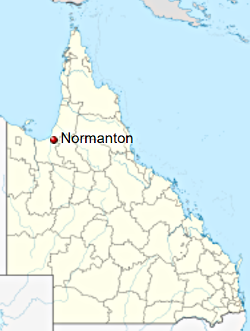 Normanton was originally settled to provide port facilities as an alternative to the Burketown port in northern Queensland. It was gazetted as a town in 1868. Although the region had been developed as a pastoral district during the 1860s for cattle, it was the discovery of gold at nearby Croydon in 1885 that saw the township boom.

The Normanton-Croydon railway opened in 1891 and road links to the Cloncurry copper fields saw Normanton port become a gateway for the north-western region of Queensland. In 1888 it became the hub of the surrounding police and court district, which included the towns of Croydon, Georgetown, Cloncurry, Burketown, and encompassed the large district of Cook and Burke. Sittings of the Supreme Court were held there twice a year.

A 9-acre area on the outskirts of town, adjacent to the hospital reserve was proclaimed a gaol reserve in 1890. A timber Police Goal opened during the following year. At the time, the town had a population of 1,251 people.

Although initial plans for a new gaol featured a warder's residence and 24 cells, the eventual building was constructed on an unproclaimed reserve in Borck street (now Haig street) in 1892 and had just four cells. The Police Gaol proclamation was rescinded in 1893 when the prison was proclaimed open, meaning that control passed from the police department to the prisons department, and it could hold both short and long-term prisoners, along with those awaiting trial.

The complex contained two buildings, one being a single-storey white-ant-proof cement and corrugated iron cell block constructed during 1892-99, and a small timber and corrugated iron building formerly used as quarters for the trackers. The concrete and iron rails used in construction were left over from the construction of the railway. The walls were 20 cm thick, and the cells had iron doors. The gaol floor sat directly on the ground, unlike the previous timber gaol from which a prisoner had escaped after breaking through the floor. The corrugated-iron hipped cell roof had ventilators which kept the building cool and well ventilated in the hot summer months.


There were initially four cells, measuring 5.5 x 4 metres, but another two cells (3 x 2.5 metres) were added in 1895 because of overcrowding, as sometimes there were as many as 24 prisoners held in those cells. A new kitchen and a stockade fence around the perimeter were also added at this time. A seventh cell was added in 1899. The yards and cells allowed the separation of remand prisoners from those carrying out longer sentences.

Trackers' quarters were in a two-room weatherboard hut located in the eastern corner of the block.

In June 1945, after years of underuse, the Normanton Gaol was declared closed and reverted back to a police gaol. The building was then used only as a watch house until 1992, when it was closed because it failed to meet operational requirements established after the 1991 Royal Commission into Aboriginal Deaths in Custody. The gaol was listed on the Queensland Heritage Register in July 1999, and is now used for tourism purposes.


Back to Colonial Queensland Prisons
Back to the History Vault