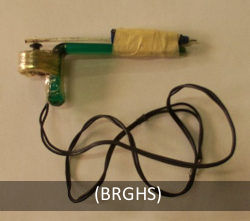 Some of the most popular objects in the Boggo Road Gaol Museum collection were the 1980s prisoner-made tattoo machines, or 'boob guns' as they were known in prison slang. These illegal items were not only testament to the ingenuity and resourcefulness of some inmates, they were also an artefact of resistance against the powers-that-be. Our tour guides had working models of these things that were always a big hit with visitors, and a BRGHS member created a display about these tattoo machines at the Anthropology Museum, University of Queensland.

Tattoo machines like this were an illegal item in prison, not only because prisoners were required to maintain the same appearance during their sentence, but also because they could be used as weapons. Another important reason for restricting their use in more recent years has been to minimise the spread of communicable diseases such as hepatitis C by sharing needles. However, this did not prevent inmates from getting tattoos, and there were over 100 tattooing items in the Boggo Road collection, including both complete and incomplete machines and components, showing that tattooing was a widespread practice within the Queensland prison system.

These machines could be cobbled together using bits and pieces found around a 1980s prison. Image A (above) shows what the components were, and the list below shows where these bits and pieces came from:
Ink was applied to the skin prior to puncturing with the needle, although sometimes a mix of ground charcoal and water was used. Professional tattoo shops use special inks that do not irritate the skin and are unlikely to cause allergic reactions. Makeshift inks used in prison tattoos may be unsafe and damage the skin, causing permanent scarring. They can also contain dangerous chemicals.

The machine worked as shown in Image B (above).

Apart from the obvious risk that an inmate could leave prison with awful tattoos, there are serious health risks involved with prison tattoos, as sterilising the makeshift equipment is difficult or impossible. Apart from basic skin infections, deadly diseases like hepatitis and HIV/AIDS can be passed from one prisoner to another when needles are re-used. The playing card in Image C is from a deck issued to prisoners, while the poster in Image D was also used in Queensland prisons.

These were brilliantly clever devices but potentially fatal to use.