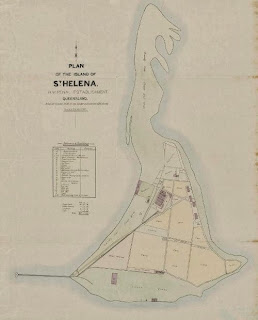 Overcrowding at Brisbane Gaol on Petrie Terrace in the early 1860s led to the use of the prison hulk ‘Proserpine’ in the Brisbane River. The prisoners held on the hulk travelled to nearby St Helena Island in Moreton Bay on most days to construct a new prison there (this was actually intended to be a quarantine station before plans were changed). The island itself was proclaimed to be a Penal Establishment on 18 May 1867, and John McDonald was appointed as the first superintendent.

The original prison was made up of two wards holding up to 80 inmates, and single cells for eight more. It was surrounded by a wooden stockade wall, 14 feet high, which had a 20-foot wide ‘track’ between it and the buildings inside. By the end of the century there was accommodation for up to 300 men on the island.

The ward walls were made of hardwood, grooved and tongued with iron, while the internal walls were made of thick iron wire, allowing constant supervision of the inmates (who slept in hammocks). Other spaces inside the stockade included a hospital, kitchen and bakery, water tank, wash house, and dining shed.

What is the difference between a prison and a penal establishment?

A prison is a building that has been officially proclaimed as an incarceration facility. A ‘penal establishment’ includes all the surrounding land. St Helena was actually proclaimed to be a high-security ‘gaol, prison, and house of correction’ for long-term inmates on November 1875, before again being proclaimed a Penal Establishment in July 1879.

St Helena was considered to be a model prison of the time. The enforced isolation and high levels of discipline on the island resulted in the prison becoming self- sufficient and profitable. The native vegetation was cleared by the prisoners, who planted crops there. The prison food, including hominy and bread, was obtained by growing wheat, sugar cane and vegetables, and also raising sheep and dairy cattle herds.


Buildings were also constructed using local resources where possible. For example, a lime kiln opened there in 1869 to burn coral in order to make cement.

During the 1870s a number of trade workshops were erected, and some prisoners were trained as saddle makers, tinsmiths, boot makers, tailors, blacksmiths and carpenters. Despite its relative success, St Helena was considered by some officials to be unsuitable for the appropriate classification of prisoners. Following the decision in 1921 to use both divisions of Boggo Road for male prisoners, St Helena became a prison farm after long-term inmates prisoners were transferred to the metropolitan prison. St Helena eventually closed in December 1932.

The buildings soon deteriorated into ruins, but in 1979 the island became a National Park and the following year it was gazetted as Queensland's first Historic Area. It can now be explored on various guided tours.