The Myth of Halliday's Leap 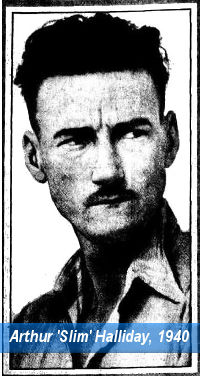 Arthur Ernest 'Slim' Halliday, convicted murderer and infamous Boggo Road escapologist during the 1930s-1960s, is the subject of some incredible tales, some tall, some true. Like the time he bent a solid metal cell door back with a winch made from bits of wood and bed sheet. Or the time he burned a hole in roof of the mattress workshop in a bid to escape. Or when he made a replica gun from bits of leather. These are some of the true tales.

There is, however, one particular story that is as tall as it gets. During some early Boggo Road museum tours, a highly-respected former prison officer would tell visitors all about 'Halliday's Leap', the place where Halliday jumped off the roof of E Wing in 1940 and landed on the top of the perimeter wall before completing his escape. Most visitors believed this story, but careful consideration of the facts creates doubts.

The legendary leap would have involved jumping from a three-storey cellblock roof onto the top of the red-bricked outer prison wall, a near-impossible feat involving a drop of 8 metres over a width of 4 metres. The curved top of the wall itself is no more than 30cm wide and is over 7 metres high - not a safe landing spot for someone jumping from a great height. 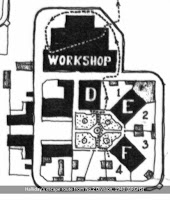 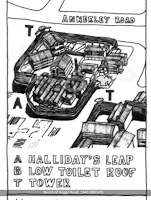 The official records at Queensland State Archives tell a very different story, but one that is no less impressive. Halliday had planned this escape for months, secretly making and hiding escape ropes, grappling hooks and wire cutters in the prison workshops. One day he slipped unnoticed from a line of prisoners and scaled the 10-foot high fence of the exercise yard to gain access to the Track that ran around the inside of the perimeter walls. He climbed onto the workshop roof and dropped down through a skylight that gave him access to the inside of the workshop, where he cut through wire mesh walls with the hidden wire cutters to get to his escape ropes. He climbed up onto the roof again and hooked the longest rope over the outer wall, at a place he had worked out to be a blind-spot from the towers. He dropped the shorter rope down the side of the workshop and climbed down onto the Track, then climbed up over the prison wall using the first rope before changing his clothes and making his escape (for a few weeks of freedom).

How did this myth of 'Halliday's Leap' grow? One clue comes from discussions with local residents who were children when the escape happened. When news of the breakout got out, local parents ordered their children to stay home, but the kids had other ideas and formed themselves into 'posses', excitedly roaming the local streets in nervous pursuit of the escaped prisoner. They circulated a story that Halliday had jumped from ‘a’ roof during his escape, and in the process of ‘Chinese Whispers’ this became a cellblock roof. This story took hold, and 50 years later it had become accepted even within modern prison officer circles.

Halliday escaped over the blind spot at this section of the wall again in 1946, and it gained the name of 'Halliday’s Leap’ quite early on. Following yet another escape attempt by Slim, this time in 1953, a newspaper ran an article with the headline 'HALLIDAY’S LEAP HEADACHE FOR BOGGO ROAD STAFF: WEAK SPOT IN THE PRISON WALLS'. However, the blindspot had in fact been fixed in 1947 with the erection of a new stand-alone guard tower (called E Tower) in the prison grounds to the southeast of the workshops.

The workshops and Halliday’s Leap were later demolished as part of the prison modernisation of the early 1970s. The myth of Halliday's Leap - the one in which he jumped off a cellblock roof - has only been demolished in more recent years.

Back to Mythbusting
Back to the History Vault