Reporters of the 1920s and ‘30s sometimes got to interview prison escapees, who came across as being quite proud of their escape efforts. Newspaper stories were full of their boasting, and they were presented as being ‘clever’ or ‘daring’. The term ‘pimpernel’ was a reference to the popular movie The Scarlet Pimpernel and often used to describe any ‘bold’ prison escapee.

Four 1920s/30s escapees from Boggo Road were portrayed as ‘pimpernels’: Percy Lee, Ernest Richards, Charles Watson, and then Arthur ‘Slim’ Halliday. All of these men escaped from the old No.1 Division.

1926: Percy Lee
Percy Lee was the only prisoner to get away from Boggo Road and not be recaptured as an escapee. Although he was eventually returned to a prison, he never saw the cells of Brisbane again.

Percy was a ‘dip artist’ - a pickpocket - serving 12 months for his crime. Inside Boggo Road his good behaviour made him popular with the officers, and he was trusted enough to be allowed to work outside the walls. However, one day a well-planned escape plan was put into operation when a gang of his underworld friends pulled up outside the prison in a taxi, while Lee was working outside.

Lee ran up and jumped into the car and the men pulled a gun on the driver and told him to drive as fast as he could. The supervising officer barely had time to draw his revolver and fire two quick shots before they were gone. It was all over in seconds.

Nothing more was heard of Lee until the following year, when he was arrested in New Zealand for an assault and robbery committed in Sydney. He served out his new sentence in Sydney. If he had managed to keep out of trouble in New Zealand he may well never have been caught again. 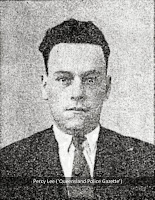 1932: Ernest Richards
When Ernest Richards tried to escape in 1932, it sparked off a chaotic nine minutes that the newspapers of the time called ‘The Biggest Sensation in Boggo Road History.’

Richards had been arrested in Brisbane just five days earlier, after escaping from South Australia’s Yatala Prison where he had been serving ten years for burglary. He enjoyed telling the police how he had escaped and made his way to Queensland. Richards boasted that his escape from a solitary confinement cell in Yatala involved:
However, those in the know suggested that Richards was a liar.

One February afternoon, Richards was in the remand yard in No.1 Division when he pulled up a length of gas piping from the ground and bent one end into a hook, which he then looped over the outer wall. He scrambled up the pipe but the tower guard spotted him and opened fire. One bullet grazed Richards’ right hand. He swayed from side to side on top of the wall to throw the aim of the guard. He then pulled up the pipe, reversed it over the wall, thumbed his nose at the guard, and slid down the other side.

A posse of armed officers set out after Richards, who turned and waved a jeering farewell before heading to Park Road railway station and then jumping fences into Quarry Street. However, a bullet hit Richards in his left calf. Bleeding badly he crawled into a backyard poultry shed. Three boy scouts, part of a crowd at a nearby cricket match, were the first to reach the wounded prisoner. When the officers arrived on the scene, he surrendered and was returned to South Australia the following week.

1935: Charles Watson
‘PRISONER ESCAPES BY PLANE!’ cried the Courier-Mail headline. It was almost true. Charles Watson did not actually get out of Boggo Road in a plane, but it was the first Australian escape where a plane was used in the getaway. Once again, the newspapers had an ‘Elusive Pimpernel’.

Watson, from Toowoomba, was serving six months for stealing petrol. Inside Boggo Road he was trusted enough to be employed as a kitchen boy in the home of Superintendent Whitney, near the main prison entrance. One afternoon he was even left alone in the house. Seeing his chance, Watson dressed himself in a suit belonging to the superintendent’s son, then stole his wallet and drivers licence. He slipped out through the main gate, keeping close to the wall so that the tower guard would not see him, and hailed a taxi from Annerley Road to the Archerfield aerodrome.

At the aerodrome Watson flashed the drivers licence and claimed that he was the son of Superintendent Whitney. He had to get to Toowoomba to see his sick mother, and told the New England Airways staff to charge the fare to his father. They wanted to check out his story but by chance the phone was locked.

As Watson’s plane touched down, officers and police were scouring Brisbane. It was evening before they found out about Watson’s flight. After arriving in Toowoomba, Watson met up with a girlfriend, went to a party, and had what he described as a ‘mighty fine time’. He hit the road after spotting the police, heading out to Kumbarilla where he worked in a timber camp for 3 weeks before walking back to Toowoomba. He then cycled for four days to Goondiwindi with the intention of leaving the State, but he was spotted by the police. He tried to get away by swimming across the McIntyre River, but was recaptured after getting bogged in the mud.

Watson received an extra two months on his sentence. He later boasted to a reporter of all the times he evaded the police during his five weeks on the run, adding that...


‘Some people have told me… that I’m a bit like that chap called the Elusive Pimpernel, and the only thing that I’m sorry about is that I didn’t have a chance of seeing the talkie they’re all speaking about - The Elusive Pimpernel. But I might get a chance after I’ve done this stretch.’

Despite the boasts of these ‘pimpernels’, it was Arthur ‘Slim’ Halliday who proved to be the greatest Boggo Road escapologist. Beginning in 1939, he made a series of spectacular escape attempts over the following decades, which are covered elsewhere on this website.