Memories of a Matron

The following is adapted from an article in the Brisbane Sunday Mail, September 1940:

‘Those who are entrusted with the guardianship of convicted persons develop their own peculiar outlook upon the criminal, differing almost in essence from the outlook of those whose duty it is to apprehend them.

When a woman has had 40 years' experience in the prison service of the State it is natural that she and at least part of her own story must provide material of great interest. Miss Sarah Ann Nixon, of Moorooka, now in her eighty third year, becomes logically the subject of an article in this series of tales from the gaols of Queensland.
Life is a little kinder to-day than it was two or three generations ago. There is less harshness, more toleration, more fines, fewer gaolings. Economic and social conditions have improved. Free and compulsory education has contributed to the general mental standard, whereas even as late as 1892 there passed through Queensland prisons in 12 months 664 males and 123 females who could neither read nor write. 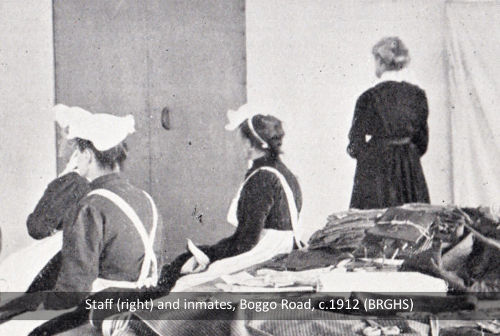 Wilder and more lawless conditions prevailed in the outside world, and intolerance and less reasonable methods within the gaols, when Miss Nixon started her prison service. Instead of a total of only 33 women admitted to prison in a year, as was the case in Queensland in 1939, we have the record of 448 females admitted in 1887, a few years after Miss Nixon became a wardress. Not only was it necessary to maintain Toowoomba Gaol as a woman's penal institution, but a police gaol of considerable dimensions existed in Fortitude Valley for short-term female prisoners and those awaiting escort to Toowoomba. Miss Nixon's experience then would inevitably range over many and more diverse types than could come within the scope of modern authority.

Murderesses, women thieves, women blackmailers, the consorts of the evilest of men, female drunkards, wayward girls, foolish girls, all the types of criminal or delinquent females that a young community could evolve were the wards at some time or other - for periods of many years or intervals of a few weeks or months - of this very old lady with the piercing, coal-black eyes and aged but unbowed body. Her memories of them are not only concerned with her charges as individuals, but are concerned with their actions in a mass.

She passed through some turbulent times in the old gaols of Queensland. Once she was called upon specially to quell a mutiny and rioting. That was in the old Valley Women's Gaol, which adjoined the State school and the site of the present police station. When this trouble occurred Miss Nixon was a wardress at Toowoomba. When the inmates of the Valley Gaol got thoroughly out of hand, the Comptroller-General sent for Miss Nixon to come from Toowoomba to take charge. She asked for and received a free hand in dealing with the mutiny. Discussing the revolt of the women prisoners and the ease with which it was quelled, the aged wardress, looking back through 40 years of prison experience, said wisely: 'I had not been there five minutes before I found what I had found before, and have frequently found since, that in gaol as out of it the most petty causes are more often than not the cause of very grave troubles. In this case the whole ugly situation, involving disobedience and open rioting and rebellion, was due to the loss of the food scales from the kitchen and failure to replace them. Instead of each prisoner receiving her food ration by weight as provided in the regulations, the cook was making guesses, and guesses which were influenced by her likes and dislikes among the prisoners. Many of the women were going short and others receiving more than their share. 'I immediately procured scales, and the rioting ceased. Simple, wasn't it?'

The Valley Gaol had become a scandal by this time. A populous district had grown round it, and the fence dividing it from the State School grounds was in such disrepair that the children could converse through it with the prisoners. These, largely drawn from the lowest stratum of the city, were given to the use of vile language. At its best the fence was low enough for the older and taller children to look over! Miss Nixon had the fence repaired, and stopped the language, which must have been no mean feat, having regard to the times and the manners of the women charges.

No one knows better than this old lady how long it takes to bring about a reform. Long before she joined the prison service in 1883 the Sheriff had been insisting that both Toowoomba and Valley female gaols should be either made hygienic and architecturally sound or abolished. When in the nineties Captain Pennefather was appointed Comptroller-General, and the prisons passed from the control of the Sheriff, his first act was to plead for this reform. It was not until October, 1903, when the Women's Prison at Boggo Road was completed, that Toowoomba and Valley gaols were closed and their female offenders transferred together with Miss Nixon as chief wardress. It was the beginning of a period of prison reform and the end of conditions such as had existed since the seventies in Toowoomba, when as many as 30 females were herded at night in one small dormitory.

For 20 years, until her retirement, Miss Nixon was in charge of the women's section of Boggo Road. It would be idle to picture her as the gaoleress of fiction, big and powerful of physique, heavy jowled, and fierce. She was and is none of these. If anything, she was scarcely of average height and of slim figure, but her character was firm and resolute, her mentality one of great understanding, and her outlook just.

All those qualities are easily discernible in her today, together with another, perhaps the most attractive quality of all - tolerance. 'I have seen too much of life to be intolerant.' she says, nodding her white head by way of emphasis. 'I have seen the attitude of the community grow more tolerant and understanding and conditions alter for the better.

'Years ago, I remember a girl - just a flighty, silly girl - who worked in an hotel near North Quay, which has long ago been pulled down. A midshipman from a visiting warship was stopping there for a day or two. This girl dressed herself in his uniform and strolled down Queen Street. She was given three months for what was a mere escapade.

When Marion ('Bill') Edwards was arrested in 1906 in Brisbane in man's clothes, having been a horsebreaker and a barman, and was brought to me at Boggo Road, the outlook had already altered to some extent. Nearly everyone, including ourselves at Boggo Road, took a more tolerant view. 'Today.' she added laughingly, 'if three months were given to every girl in boy's attire, we'd have to gaol most of the young female community!’

This tolerance of Miss Nixon's is most marked where she speaks of women prisoners who were under her surveillance - some of them for many years. Prison staffs do not regard their charges as do the police, who have to arrest them. They do not, for instance, discriminate between a murderer and a burglar, a confidence man or a defaulting solicitor. All are inmates of a gaol and subject to its regulations. They are well-behaved and cause no trouble, or they are badly behaved and have to be punished. Miss Nixon says that in her 40 years' gaol experience she never remembers looking on any prisoner with horror, no matter what crime she had committed. She can say of all of them: 'Poor things, they invariably made themselves far unhappier than they ever made any one else - no matter how terrible their crimes.'

It is difficult for the rest of us to judge. Perhaps Sarah Ann Nixon, 40 years' prison service, knows that even for the worst crimes there is atonement.'

Back to Prison Life

Back to the History Vault