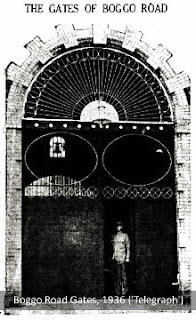 1863: The land near the Boggo Road was surveyed.

1880: Part of the surveyed land was set aside as a prison reserve.

1883: A prison for men opened on the reserve. It only had one cellblock and originally held short-term prisoners or men awaiting transfer to St Helena Island. During the 1880s another two cellblocks were added.

1890: A new Prisons Act was passed, and the cellblocks of the Boggo Road prison were extended with the addition of extra cells.

1921: Female inmates were transferred to a timber dormitory building on the southern boundary of the prison reserve, with their former prison (now known as No.2 Division, with the other male prison becoming No.1 Division) now being used for the detention of long-sentence male prisoners from St Helena.

1951: Women prisoners were transferred to the former Lock Hospital (VD hospital) near No.1 Division.

1953-54: The dormitory building that had held female prisoners from 1921-1951 was converted into another male Division (No.3), housing men sentenced to very short terms for drunkenness and vagrancy.

1968-78: The original No.1 Division was gradually demolished and replaced with a modern prison, also called No.1 Division.

1976-77: Administration office opened near entrance to prison complex. This building is currently used as the Dutton Park Police Station.

1982: A new Women’s Prison opened on the Boggo Road reserve, on the site of the former Lock Hospital which was demolished.

1989: Closure of No.2 Division following the release of the ‘Kennedy Report’.

1993: No.2 Division was permanently placed on the Queensland Heritage Register.

1990s: No.2 Division operated as a historical site and museum

1999: Closure of the female prison

Back to Prison Timelines
Back to the History Vault