The following is taken from a transcript supplied by a man who was sent to Boggo Road in 1984 for drug offences. Spelling is left 'as is':


'The Worst Holiday I Ever Had
In Boggo Road there were a few good officers and a hell of a lot of bad nasty ones! One day we were loked in our cells at 4.30pm then the next night we were allowed to stay up till 7.30pm. there were two gaols, 1 and 2, in 2 gaol we slept on thin blue exersize mats, our toilet was a billy tin, no running water and ther was no window just a slot near the top of the wall. Early in the morning we were taken down to a pit where we emptied our billy tins (toilet) then we were taken back to the yard to wait for brekfast. 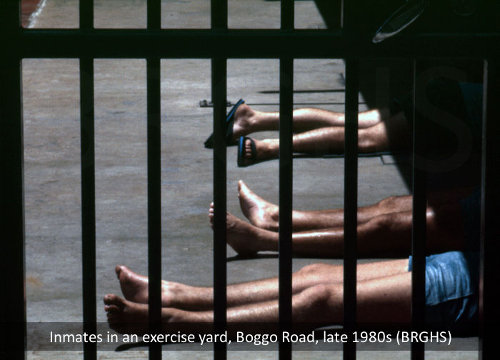 After brekfast we went back to the yard until it was time to go to work, bakers were the highest paid at $1.00 a day. I worked in the taylor shop and earned 48 cents a day, we used our earnings to buy coffee, tobacco and a few other luxury items. When not at work we used to walk up and down the yard talking, we called it doing time! But I guess it was more like passing time.

There were three different coloured shirts, white for remand and light blue and dark blue, a dark blue shirt meant you knew someone or were higher up the chain and usually you were left alone, not picked on by anyone! I had it pretty good, not only did I have a dark blue shirt I also knew some of the hardest and scaryest men as friends!

It was a long time ago but I think it was 1985 we went on hunger strike to support ill treatment of men in another gaol, they tried so hard to temped us to eat that they even bought in MacDonalds and other tempting foods.

We were treated so badly by some of the officers, I had a friend who worked in the screws mess and he used to tell me about 2 in particular that used to place bets on the amount of prisoners they could throw into the solitary on the day, and then there was half rassions. It was like if we had 2 sausages they didn’t give you, they still give you 2 but they were cut in half. It wasn’t just being locked up there was also the phscylogical torture we were exposed to! Some of what we went through I wouldn’t even bother writing down because most people wouldn’t believe a word I’ve said. I witnessed prisoners getting killed and it was made out to be suicide! The sound of inmates being beaten through the night still haunts my memory and my nightmares! I used to believe there wasn’t a heaven or hell but now I know there is a hell and I’ve been there.

I spent a bit of time in the industrial section of the newer gaol in 3 and 4 yard I was in the next cell to Finch! He was one of the guys who bombed the Whisky a Go Go club. He was one strange man, he was allowed to keep birds we called him the Birdman of Boggo Road. A couple of times he pulled me aside and said hey have a look at this! He constantly wrote to the Queen of England and had received reply’s from her! I couldn’t believe it reading letters written by the Queen it blew my mind. He was the yard sweeper and had a certain amount of freedom, he claimed he was innocent, like many of the prisoners!'