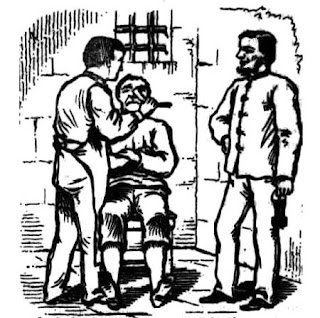 (These articles are reproduced from the Queensland Figaro, January-February 1883, and describe aspects of life in HM Prison, Brisbane, which at that time was located at Petrie Terrace. It was written from the perspective of the walls, in an 'if these walls could talk' scenario. This particular article focussed on the experiences of prisoners committed for trial. The prison at Petrie Terrace closed in July 1883 when it was superseded by the Boggo Road prison.)

"The prisoner on remand may have a few days only to wait for trial, or he may have the best part of 6 months. In the latter case he comes from the country and has had the misfortune to be committed for trial just after a local gaol delivery. As the Supreme Court criminal sittings are held only twice in the year except in the metropolis these long periods of waiting for trial are common enough.

Prisoners are not all poor men. Some of them have plenty of money if not with them behind them. Truly one half the world does not know how the other half lives. The process of which prisoners with money set about their defence bears a similarity in all cases. The criminal lawyer of the hour is sent for. Very likely he is on the ground touting for business and it is astonishing how they can scent out the moneyed men. The interview between lawyer and client is private. The prisoner states his case with consider able freedom no, matter what rascality is involved, admits his guilt off hand and is prepared to go in for an elaborate scheme of defence, only he is stopped by the man of the law with a suggestion as to terms first.

Terms occupy some time, in discussing. The lawyer has got the hopeless side of the case before him and says, ‘Well, I can get you out of it but it will cost money. We shall have to 'ready-up' a witness or two in order to have a chance with the ____ jury.’


They settle it between them and at the next interview the jury list; if it ready is most carefully scanned. The prisoner dots off all the men he knows and all those his friends know, and every effort will be made to influence those men beforehand with a carefully prepared; story on the chance of their being got on to the jury. The Crown may order some of; them to stand aside, but out of a panel of forty-eight a prisoner has hard luck if he does not get three men on to his jury who, he knows, will not let him be convicted. Who can say the extent to which law breaking is carried? Of those three men one is a publican one a storekeeper, and one a selector. The prisoner has had dealings with each. He has assisted the publican in the carriage, or perhaps, the manufacture of sly grog. The storekeeper is, the owner of a couple of good horses with defaced brands, which he picked up from a shepherd out back ; and on that selector's selection run a lot of cattle with his own brand on them which he never bred or bought. But so it is, and the prisoner comes up for trial with a family air, and is most tremendously taken in if he is found guilty. Collusion, as any Crown prosecutor knows, is common enough.

It is rather different on going to trial in the city. The jury list cannot be altogether relied on so the main idea is to get a leading witness out of the way. This is difficult to do, but when there is money it can be done and is done. Another resource greatly relied on is to induce a leading witness who cannot be got out of the way to make a qualifying admission at the trial, under the greatest pressure of cross-examination of course, which he or she would not make before the committing bench of magistrates, Money effects this object. Money does a lot of things the public knows very little about in the way of proving guilty men innocent and setting them on the world again. One way to get a horse-stealer off is for another either a mate or specially , employed and paid, to steal the stolen horse from the police paddock, ride him till he drops in some sequestered spot, where he is killed and burnt. As the police can't produce the stolen animal at the trial the case breaks down, and as they only catch one horse-stealer in fifty it is 49 to 1 they don't catch the mate who took the stolen horse out of the police paddock. Into the mysteries of branding - how to alter, deface, turn new brands into old, and the other minutiae - I need not now induct you.

All this can be learnt in gaol and more besides."