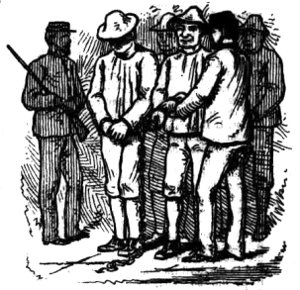 (These articles are reproduced from the Queensland Figaro, January-February 1883, and describe aspects of life in HM Prison, Brisbane, which at that time was located at Petrie Terrace. It was written from the perspective of the walls, in an 'if these walls could talk' scenario. This particular article focussed on Sundays in the prison. The Petrie Terrace prison closed in July 1883 when it was superseded by the Boggo Road prison.)

"The Sunday in this place is of all days the weariest and the dreariest. There is no work going on. The men rise at the same hour as other days. The few who are engaged in keeping the gaol clean - the sweepers and padlock polishers and such like - have done their jobs by half-past 10, or perhaps 10 o'clock. All congregate under the sheds in the yard, and hang about in little knots. Where so many men are absolutely ignorant and unable to read, or have only attained these accomplishments to the extent of their own name and reading it afterwards, which constitutes a man ‘able to read and write’ in the gaol books when there are so many of this class a good ‘pitcher’ is in high estimation. He is probably an old hand, and he starts some yarn either of his own crimes or those of other criminals, and initiates a gaping crowd of more or less youthful sinners into a few of the devices which he has found successful in evading the laws and its pursuit of him. He is heard with interest and meets with little interruption as he details how he robbed this man, and how he ill-treated that woman; how he stole so and so's horses, and where he planted them; how he met a ‘chinky’ out of the beaten track one day, and that chinaman is not likely to see the Flowery Land again though all his gold was only two ‘weights’ - these and other incidents he tells unblushingly, and with much honor and glory to himself.

The various classes hang together. Sunday being the lazy day - no work, no parson, only to kill time - it is the great day for yarning. The horse-stealers collect together in one spot, the cardsharpers in another; the larrikins by themselves, and so on, and it applies right through, and there is more real harm done, amongst short sentence men especially, on a single Sunday; within the walls, than months of solitary confinement will wipe out. Plans are made for fresh crimes. There is nothing to occupy the mind but past misdeeds, and how to avoid getting into the hands of the law for the future, and to these two subjects the prisoners give all their attention. The interludes consist of gambling for tobacco, and sugar, and matches, and as much cursing and swearing follows the loss of an eighth of an ounce of tobacco as would, astonish the ears of people accustomed to ordinary blasphemy.

They used to have some sort of service on the Sabbath. Why not now? Ask Douglas, and Palmer, and McIlwraith, and the rest of the Colonial Secretaries, and the answer they would give is, that gaols are not the place for religion of any kind - it does no good, what’s the use of it. They can do without it themselves. That ought to be enough.

Are there no books? Well there are books. There are the wrecks of a few old books used when there was ‘school’ in the gaol; there are the wrecks of a few old Bibles, the leaves of Sacred Volume being chiefly in requisition for pipe lights, as there is mostly a heap of burning rubbish the yard, and the matches are reserved for the cells at night. There are a few partially destroyed novels, and that is all. The good-conduct men who have friends in the town, are often allowed books in, but these men are not much in the yards list, have billets, such as in the cook-house, or have clerical work to perform.

So Sunday drags on, and it is with a feeling of relief that locking-up time comes. The new-comer can then once more reflect on what sort of a place he has got into. He has never spent such a Sunday before. He little thought when a gambling debt first led him to touch what was not his own, that it would end in his being committed to a convict prison. The walls know what the mental anguish of some men is, who have been in good positions when they find themselves herded with men some of whom though, human beings, are but little removed from brutes, who have spent so much of their lives in gaol that to live out of it would be impossible, who would, step short of no crime to gratify the lustful passion of the moment.

On Sunday also, is a favorite day for descriptions to be taken. As soon as a man comes in he is supposed to be passed through the gaol-books, but it is as often as not left to the Sunday after his arrival for the description ‘to be filled in.’ His height, weight, complexion, &amp;c., and any permanent marks are carefully noted. If he has been in there on a former occasion, he is just examined to see if there is any change on his previous description, and if not, H.B. meaning ‘here before’ is marked against his name. Let any visitor to the gaol cast his eyes over the description book, and the number of H.B.'s will astonish him.

Sunday in gaol. And such a Sunday. Has it never entered the head of the philanthropic that, within those walls there are some who are utterly irreclaimable; that there are some - rough they may be - to whom an occasional word in season, spoken as they can understand it, not preached in rounded sentences or hurled at them with denunciation, will do good. The Colonial Secretary does not think so. Convicts, says he, are of the devil, and to the devil they must go. And yet a gaol-chaplain if he did no good, could not possibly do any harm. This much is certain - a man who understood the ways of prisoners a little, who could gauge their thoughts however slightly, who had a touch of nature about him, could do a vast amount of good, not alone during prison life, but afterwards. There are occasions when prisoners are more susceptible than at other times, and to one of these I will allude in the next chapter."