Within The Walls of Brisbane Gaol (1883): 'Refactory Prisoners' 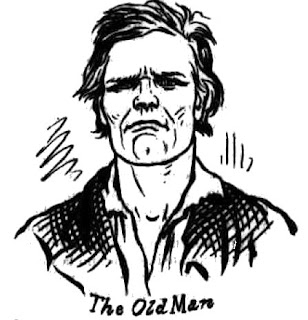 (These articles are reproduced from the Queensland Figaro, January-February 1883, and describe aspects of life in HM Prison, Brisbane, which at that time was located at Petrie Terrace. It was written from the perspective of the walls, in an 'if these walls could talk' scenario. This particular article focussed on refactory inmates who caused further trouble while being held inside prison. The prison at Petrie Terrace closed in July 1883 when it was superseded by the Boggo Road prison.)

NOTE: The following article contains racist sentiments that were typical of the day.

"Refactory prisoners commence by falling out with their fellow-prisoners, then with the warders then with the gaolers. They are commonly of the bullying class, and with very unruly tempers. They think they can do as they like, and not as they are ordered. They invariably shirk their work, and are always getting their allowances stopped (when they are lucky enough to get any allowances) for insubordination. They are always trying to get other prisoners into scraps, and contrive to elude; much of the small punishments which they should have borne.

The first punishment of a refractory prisoner is being sent to his cell; he is brought up before the gaoler next morning, and perhaps let off with a warning; the second time he is not so lucky; he has been guilty of some flagrant breach of discipline, and is brought before the visiting justice; and seven days in the dark cell is awarded him.

The dark cell is a building below the level of the ground. You go down a flight of steps into it. There are in fact two cells one to the right of the stairs, one to the left. Not a ray of light of any description can enter. There are double doors, and bare walls and floor. It is full of fleas, and has a kind of dungeon atmosphere about it, not easily described. Twenty-four ounces of bread and two quarts of water is the allowance for twenty-four hours. This is put in at noon of each day, and for seven days that is the only indication you have of what time it is.

We walls know something about what seven days in the black hole is. A man we recollect got seven days. He told us afterwards something like this;- ‘I tried to make out , my case before the visiting justice, but the evidence was on the other side. Smarting with the injustice of the sentence, I could have murdered anyone who touched me. Twenty-four hours was endurable, but it was summer-time, and the heat grew intolerable on the second day, or sometime before the bread and water came round for the second time. I drank all the water straight off in the first half hour, and was soon raging with thirst again. I tried to keep still and quiet, but it was no use. Imagination soon began to work. I felt loathsome, reptiles crawl over me and yelled with fright at their clammy touch. I saw the hangman with his ghastly face, trying to catch hold of me. I felt from corner to corner of the narrow cell. I shouted at the top of my voice for assistance and prayed to be let out. I fought with the wall and fell down bruised and helpless in the effort. The momentary exhaustion passed and again I wrestled with the hangman and his crew, I suffered all the tortures of uncontrollable thirst, and finally lost consciousness.

How long unconsciousness lasted I have no idea. There was another day's ration in the cell, when I once more became aware of the locality. And the day after there came another ration. (So long as prisoners ramp and rave in the dark cell it is all right; they can stay in, but it was too quiet now, and on the fifth day they investigated the cell.) I don't know much about that investigation but it was conceded that I had had enough of the 'black hole.' So I had; for then and always.

A worse punishment affecting the body is the lash. A prisoner will have to be very insubordinate before this is inflicted, but it can be inflicted for continued insubordination. I have seen two men flogged. Everybody, that is the prisoners in the gaol, was drawn up near the triangle, so that a due impression might be conveyed to them. The common hangman makes his appearance, pulls off his coat, rolls up his sleeve, draws the cat through his fingers, and if he can get the chance puts a few more knots in it. The culprit is stripped to the waist and fastened up, the doctor takes up his position, the word is given, the lash whistles through the air and falls with all the weight the old flagellator can put into it across the delinquent's back. He is a heavy flogger in spite of his age and a deep red mark where the blow fell, a second, a third, and fourth follow; the red lines deepen and swell, and as the remaining blows of the sentence are given, blood flows freely, and the flogger's left hand is all bloody as he draws the cat through after every stroke to clear it of the blood, bits of skin, and flesh.

It is a sickening sight. What must it be to the man who feels it. Men of different powers of endurance take it in different ways. Some scream, and yell, and writhe, and give every outward expression of the torture; others control themselves until the last strokes; an occasional one endures it without a sign, but these are very rare. The two I saw were of the first and last descriptions. You could have heard the screams of one a mile off; the other put on his coat as if nothing had happened. It is a terrible ordeal all the same. A few months ago a man was flogged down the river. He was found dead in his cell four days afterwards. But he wasn't flogged to death of course. Oh no! He died of ‘general debility.’

Close confinement to your cell is bad enough for ordinary punishments in the summer-time. A number of very rowdy men came in once, who were ordered to be closely confined to their cells, and allowed one hour's exercise only a day. It was the height of summer. They were men of stony constitutions, and devil may care fellows, and they had offended against no law of the Queen or country, but they got within the walls and may be there yet. Nobody cared whether they lived or died.

The ventilation of the cells is bad at any time; in summer they become regular stink-houses. In addition to this, the drains where everything is deposited are right under the one end of the ward mostly used now. On opening the cell doors on a hot summer's morning, the rush of foul air nearly knocks the warders down. They will tell you so themselves. If it is bad for them what must it be for the men who are in those cells for thirteen hours on end. You will see them all through the night with their faces close against the grating over the door, trying to catch a breath of less poisonous atmosphere than reigns within. In the old days before the work shops were removed it was worse, for then you had to put up with this atmosphere by day and by night. Yet men lived through it, though there, is always more or less low fever-hanging about.

The rowdy men on remand had a very bad time. It was very hot, and one after the other the poor devils got this low fever, and had to be attended to. How we wish the gaol doctor could have been round for once during the many years of his tenure of office, just when the men are let out in the morning and the cell doors are opened. It would have done his delicate nasal organ good. He has been known to venture down to the drain during the day-time when the stench is at its minimum, and say -

‘H'm, dear me. How very unpleasant to be sure.’

But nothing more was ever heard of it, and nothing but the unremitting attention of the officials has pre vented frightful fevers breaking out. Of the men who died within the walls, most of the cases have been ‘senile debility,’ except where sus. per col.** has been recorded. The rowdy men, however, did not die. Having got fever, every effort was made to set them up again, and successfully.

We walls have seen much we don't pity prisoners for a bit. Take them all round they are a bad lot, but it is rather too hard to forbid them the common necessity of fresh air."

* There are a number of journalistic accounts of this underground ‘dark cell’, but a 2006 archaeological dig at the site found no physical evidence that any such cells had existed.