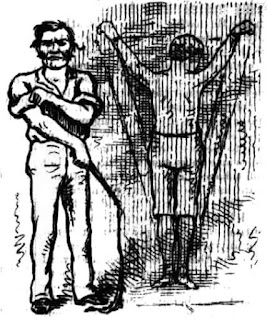 (These articles are reproduced from the Queensland Figaro, January-February 1883, and describe aspects of life in HM Prison, Brisbane, which at that time was located at Petrie Terrace. It was written from the perspective of the walls, in an 'if these walls could talk' scenario. This particular article focussed on the execution procedure. The prison at Petrie Terrace closed in July 1883 when it was superseded by the Boggo Road prison.)

"‘To be hung by the neck until your body be dead, and may God Almighty have mercy on your soul.’

With these words ringing in his ears the man who has wilfully taken the life of another is taken back to prison and at once conducted to the condemned cell. Here he is dressed in gaol clothes, and ironed. Who rivets the leg irons on? Well it ought to be done by a warder and generally has to be done by one, but if they can run the carpenter or any other man into it they will. It is not always easy to get the carpenter to do it. He would rather take 3 days in the dark cell than in any way assist. But whether he does it or not it is: not long before the clink, clink of the hammer tells that those rivets are being clinched which will not be broken until within a few moments of the human being on whom they are fastened being hurled into eternity.

How long will that be? He has no hope of a mitigation of the sentence. He may be a blackfellow to whom death and life are much the same; he may be a chinaman who is quite as resigned to the prospect of playing fantan in the next world as in this; or he may be a white man. With blackfellows and Chinamen we, no more than anyone else, need trouble. The blackfellow is a ‘brute’ and must be put out of the way. The Chinaman is not wanted in the country, and one less will please the people. As to the white man he has the colour of his skin on his side, and so with a month in which to do it in he has to be ‘crammed’ for eternity.

There may be an occasional case in which the ministrations of the attendant minister are at first listened to with attention and seriousness, but in most instances the condemned man is too full of the dreadful situation in which he is placed to be able to collect his thoughts, until the last ten days. He is allowed none but religious books, but on application to the doctor he can get anything in reason he wants to eat and a certain amount of stimulant, usually brandy. Condemned men do not have very good appetites but the principle they go on, or rather their cook goes on, is ask for everything you can get and if you can't eat it I will. The diet is not very closely restricted. A man, like a bullock, ‘dies’ better if he is in good condition, and the gaol people think it reflects credit on them when a man ‘dies well.’

The closing scene, though it seems very terrible to the few outside people who are allowed in, is nothing in comparison with some of the scenes which take place prior to the fatal morning, and which never go beyond the walls. Some men have no sense of their position. We walls saw one man, executed who revelled in the idea of death. He was a western teamster; and refused all religious ministration. The day before he was hung he ate enormously, he made merry with everybody that came near him; he danced along the verandah when at exercise near the condemned cell so far as his irons would admit him; and throughout the night he sang all his camp fire songs, he cursed and swore, and went through his western orgies one by one and fought his fights over again, making use of awful language, but most awful as such a time. The hardest hearted man in the gaol stood aghast. He could not be stopped; it was his last night on earth and he intended to put it in as he chose. Ten minutes before he was executed he asked for a steak. Half an hour afterwards the remains of James Elsdale - the Ringtailed Rover - were in a shell on their way to the cemetery.

Other men such as chinamen and blackfellows meet their fate with indifference. Most men are overwhelmed by their position. They neither eat nor sleep. They pace the cell and gaze vacantly through the ‘gridiron’ as they call the iron barred gate of the cell. Some men weep most copiously; a sympathetic look from a passing prisoner will start their tears afresh. But they are able generally to gain sufficient composure to carry them up to the last two or three days. Here again they are upset, for they hear the gallows being erected and as the condemned cells now stand can see the awful engine of death as they take their daily exercise of one hour in the 24.

The night before the execution they may too catch a glimpse of the common hangman who comes to stretch the rope and fasten it to the crossbeam. These things, though the authorities do their little to avoid redisturbing the condemned man's mind, can not well help escaping his notice. The hangman requires assistance to stretch the rope. Who helps him? There are sure to be a couple of blackfellows for that work. No white prisoner will do it. Let them earn a fig of tobacco and a box of matches which the hangman has to give in payment for stretching the rope while he soaps it and puts his knot in it. And he delights in the dirty work.

During an execution the other prisoners are not now allowed to be in any position where they can see what takes place; except that from the remand yard they can sometimes see the condemned man mount the scaffold to go on the drop. Ten seconds scarcely elapse between the last stair being mounted and the fall of the drop, so quick is the executioner in adjusting the cap, the rope, and drawing the bolt.

Then there is a dull weary creaking sound as the drop swings back, which is heard all over the gaol, and we know that he is gone to his last account.

It is at such a time as this that an appeal to the better feelings of prisoners might be successfully made. On the morning of an execution - indeed during the whole time of the condemned man's stay in the gaol, the sensibilities of prisoners are softened. They know that they must face death themselves some day, though most probably not in that form, and they cannot help turning the subject over in their minds. They speculate on what eternity is and a seriousness pervades them which only needs a little moral teaching at the moment to create in some cases a lasting impression. We walls don't want to say that theirs is a very fruitful soil in which to sow the seed. But there is soil of some sort, and anything which will tend towards reformation and not towards making prisoners 100 times worse on discharge than on entry might be made use of. ‘Can the leopard change his spots’ you will say? Perhaps not, but you don't know till you've tried in every case."