The street called 'Boggo Road' got its name from the fact that it ran to a district of southern Brisbane that, in the 19th century, was known unofficially as 'Boggo'. This area approximately covered the modern suburbs of Fairfield, Yeronga and Rocklea, as far east as the current Ipswich Road. This name was mentioned in newspapers in 1851, and may well have been in use among the European arrivals during the 1840s.

The road itself developed during the 1850s as a bullock track winding from the One-Mile Swamp (Clarence Corner). It has been suggested that it was called Boggo Road because it became very boggy in wet weather, but then dozens of other roads around Brisbane would have been just as bad. Another theory is that Boggo (or 'Bloggo' or 'Bolgo') was a corruption of an Aboriginal word meaning 'two leaning trees', and that the road was named after two prominent trees at either One-Mile Swamp or what is now Wilkins Street, off Annerley Road. The name Boggo Road was not mentioned in newspapers until the mid-1860s. 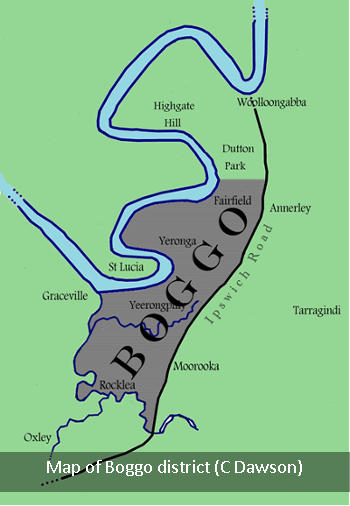 Although the name was never officially designated to the district, other landmarks bearing the name Boggo included Boggo Junction railway station (1884),the Boggo Theatre (1888) and the Boggo National School (1871).The Boggo National School became Yeronga State School in 1886, the Boggo Theatre eventually became the Princess Theatre, Boggo Road was renamed Annerley Road in 1905, and Boggo Junction became Dutton Park railway station in 1914. The use of the name Boggo eventually died out, but to the locals H.M Brisbane Prison was always known colloquially as 'Boggo Road Gaol'.

(Gaol is an old British word, derived from the French, while Jail is the Americanised version. They are pronounced the same way.)

READ MORE
Back to Local History
Back to History Vault