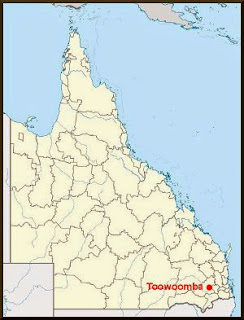 In 1864 Toowoomba became the third Queensland town (after Brisbane and Rockhampton) to have an officially-proclaimed prison. A courthouse first opened there in 1863, dealing with cases from the Darling Downs, the Maranoa and Warrego, and as an assize town Toowoomba needed a prison to house convicted prisoners or those awaiting trial. This was erected behind the courthouse on Margaret Street and was proclaimed a prison in June 1864, although the boundary wall and main gateway were not completed until September of that year.

The initial capacity of the Toowoomba prison was 46, and during the first full year of operation a total of 145 prisoners were confined there. Just six of these inmates were women. From 1870 onwards all female prisoners in southeast Queensland serving sentences of more than two weeks were incarcerated in the Toowoomba facility, as the Brisbane prison on Petrie Terrace became all-male in an attempt to resolve the overcrowding problems being experienced there. This move was opposed by leading citizens of Toowoomba, who publicly argued that when the women were released onto the streets of their town they would ‘resort to crimes of the most flagitious and demoralising character’. Of the 212 inmates held in the prison during 1871, 76 were women.

Toowoomba was also the first Queensland town outside Brisbane to host executions. A total of four men were hanged at the prison during 1864-70. Hangings took place in the prison yard, but as with the Petrie Terrace prison the low walls allowed people perched in nearby trees or on rooftops to get a view of the proceedings inside.

In 1882 the old Toowoomba courthouse was converted to a female reformatory to house juvenile female offenders, allowing them to be confined away from the older prisoners who were reported to be having a negative effect on them.


The dimensions of the Toowoomba Gaol were described in the Darling Downs Gazette in 1889:


'This mainly consists of two buildings, both originally of one story but to one a second storey had been added some five years ago. Together they contain two cells for male prisoners, each cell being 16x19ft and 10 feet high, each with 4 openings (for ventilation) 2ft 9in square, barred; 2 cells for females 18ftx10ft, with 3 openings; 4 single cells 8ft 8in x 7ft 2in x 10ft, with 2 openings; 1 female dormitory (upstairs) 32ft x 21ft 9in x 8ft 6in, with 8 openings, each of 2ft 1½in x 1ft 6in, shuttered, and with 2 ventilators; a hospital cell14ft 2in x 10 5in x10ft, with 2 glassed windows; a workroom 16ft x 18ft x 10ft, with 6 openings. Of these latter rooms, the female dormitory, hospital cell, and workroom are contained in the two storey building.' (Darling Downs Gazette, 23 February 1889)


The three wings to the side of the central wards in the above plan (from the 1868 'Select Committee Report on Prison Discipline') were planned but never constructed. The courthouse would have been to the left of this area.

In September 1898 the facility was proclaimed a female-only prison, but it was finally closed in October 1903 after the new women’s prison opened off Boggo Road in Brisbane, and all the inmates at Toowoomba were transferred there. Their old prison was knocked down in early 1904.