The No.2 Division cellblocks were built in 1903 and the cells had no toilets in them. This meant that prisoners (and for the first 20 years that was female prisoners) had to use metal tubs with lids and carrying handles in the corner of their cells. These were affectionately known as the 'shit tubs'. Prisoners in No.2 Division endured these 19th-century toilet arrangements until the late 1980s. This could be a bit disconcerting and humiliating for new inmates, some of whom determinedly held off going to the toilet until the morning and then used the facilities in the exercise yards. Some prisoners were in the habit of squatting to urinate in the tub, because missing the narrow rim left a long-term foul smell from the floor, even worse than the tub itself.

The tubs were originally made decades ago in the old tin workshop at the prison. They were 26cm in diameter and 27cm high. The cell numbers were painted on top of the lids, and every morning they would be carried to 3A, the special ‘sanitary yard’ behind F Wing, for emptying and washing. An experienced worker could carry six tubs in each hand. As you can see in the photo gallery below, the sanitary yard in No. 2 Division is still largely intact. It contains a concrete trough for emptying the tubs out, a water boiler, and several shower heads. 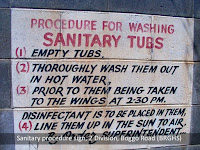 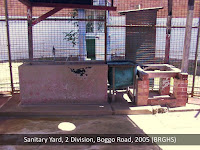 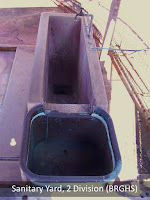 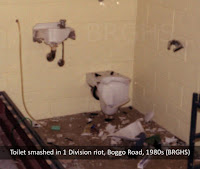 The prisoner in charge of 3A yard was known as the prison sanitary manager, or more commonly the ‘turd-tosser’. This was a job that had its perks. While new inmates thought of it as foul work, the old timers knew that it gave a prisoner some freedom as some officers were reluctant to hand search a prisoner smelling of excrement and urine. Another perk was the sanitary yard showers, under the corrugated awning at the back of F Wing and next to a high water tower. There was a small boiler at ground level and sanitary workers were known to enjoy the luxury of rare hot showers there, using scrubbing brushes to remove the ingrained dirt that cold showers could not. As former officer Steve Gage recalled in his book Boggo Road Prison: Riots to Ruin;


"It should be noted in particular that the shit tub yards of 2 Division was a popular place to bathe, as prisoners in this area would block the sewer outlet in the bath sized disposal point and fill it with water for bathing; this was a sight to behold."

Of course there was always more than one use for a metal tub in a prison. The (clean) tubs could be used to hide and transport contraband, or provide endless target practice for bored inmates as they spat into it from their beds. During prisoner protests the lids could be banged in noisy solidarity on cell doors. There were also times when the tubs were used in fights between prisoners, and some of the less-trusted inmates were given rubber tubs for fear that they might use a steel-hardened can as a weapon. Some particularly unruly inmates were known to throw the contents of their tub over unsuspecting officers when their cells were being opened in the mornings.

The toilet tub system was in place until No.2 Division closed in 1989, although the newer No.1 Division cellblocks that were built during the 1970s had toilets in the cells. A true luxury for the inmates in No.1 Division! Still, as the 1980s photo in the photo gallery shows, this luxury was not always appreciated and the toilets were among the first things to go when prisoners smashed up their cells during riots.

After years of being used in their particular way, the tubs were then used as ash trays and waste bins by some unthinking visitors on the 'ghost tour' cellblock sleepovers when the gaol opened as a museum. This kind of disrespectful cell damage led to the sleepovers being stopped. The tubs later became part of the Boggo Road Gaol Museum collection.