The Study of Penology 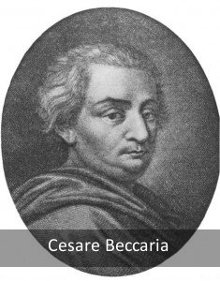 The following is adapted from the Encyclopedia Brittanica:

'Penology, also called Penal Science, is the division of criminology concerned with the philosophy and practice of social efforts to repress criminal activities. The term comes from the Latin poena, meaning 'pain,' or 'suffering', and has stood in the past for the policy of inflicting punishment on the offender, although penology also incorporates other policies such as probation, medical treatment, and education, aimed at the cure or rehabilitation of the offender.

The principal aims of penology are:
Modern penology dates from the 1764 publication of Cesare Beccaria’s pamphlet on Crimes and Punishments. This represented a school of doctrine with which Rousseau, Voltaire, and Montesquieu in France and Bentham in England were associated. This assumed every criminal act to be a choice determined by a calculation of the prospective benefits and risks of the act contemplated, and that crime could be curtailed by adopting punishments that outweighed any assumed advantages. Excessive penalties, such as death, were thought to be unnecessary and therefore unjust.

This classical school was followed by the neoclassical school of the revolutionary period in France, which insisted on the recognition of varying degrees of moral, and therefore legal, responsibility, as in the case of children and the insane, as well as general mitigating circumstances. The doctrine of the 'individualisation of punishment' (the punishment of the individual rather than of the crime committed) is a development of this fundamental principle, and is important in present-day penology.

During the last quarter of the 19th century there was widespread acceptance of Cesare Lombroso's theory of crime. Known at first as the Italian school of criminology, and later the 'positive school', it held that the criminality was an inherited trait and therefore the criminal was not wholly responsible for his acts. While society still needed to protect itself against him, it would be irrational to punish him as if he were a free moral agent.

This school of thought was later discredited, although it did pave the way for studying the psychology of criminals. From studies such as these, criminologists discovered that there was no single formula that accounted for all criminals, and the emphasis turned to researching the individual or social factors that determined criminal activities, and the ways in which society could effectively deal with criminals.'

Back to 'Penology and Prison Reports'
Back to the 'History Vault'