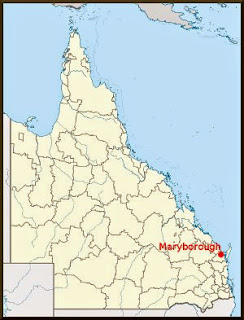 Maryborough probably holds the Queensland record for having the shortest-lived prison, after the police lock-up there became a prison for less than a month in May 1877. It was an unusual move, but it was made in unusual circumstances.

Executions in 19th-century Queensland were legally required to be conducted at places that had officially been proclaimed as prisons. This created a problem in 1877 after two Pacific Islander labourers named Tommy and George were sentenced to death for a rape that took place near Maryborough. Noisy sections of the local (white) population demanded that the executions be conducted in the town so the rest of the indentured labour population of the sugar plantations could be ‘taught a lesson’.

Although the government decided to hang Tommy and George in Maryborough, the town only had a police lock-up instead of an official prison.

These lock-ups were small structures containing a few cells and usually attached to a courthouse or police station. They were used to confine prisoners for a short space of time only and were staffed by police or court officials.

During the 1850s the New South Wales government voted that £1000 be spent on the erection of a court house and lock-up in Maryborough, but this was not completed until about 1863. Built on the corner of Kent and Adelaide Streets, on the site of the current town hall, these were said to be the first brick buildings in Maryborough.


The lock-up was extended circa 1870, but soon afterwards plans were prepared for a new courthouse and lock-up in the town. This did not open until 1878, and so the old lock-up was still in use for the execution in 1877. It consisted of a little yard and five small cells, the largest of which was 3.5 by 2.6 metres, all surrounded by a four-metre timber wall. The cells were intended to hold only one prisoner each, but often housed up to four.


Conditions inside these cells were harshly criticised in the press:


'Their sufferings in the “Black Hole,” with the thermometer registering x can hardly be imagined, much less described. This is the sort of thing that we dub “the administration of justice”, and this is the kind of humanity that everywhere follows in the wake of our “most Christian” nation.' (Brisbane Courier, 25 December 1876)

These cells would have held Tommy Ah Mow and George as they awaited their deaths. For the purposes of the execution, the lock-up was officially proclaimed to be a prison in May 1877. It had been planned to allow up to 600 Pacific Islanders into the yard to witness the hanging, but authorities grew nervous of the large crowds when the time arrived and instead decided to allow a dozen representatives of various sugar plantations inside. The prison reverted to back to the status of a lock-up after the execution was completed, making it the shortest-lived gaol in Queensland history.