Upon arrival at Boggo Road, the prisoners had to change out of their street clothes and take a hot bath. Their clothes were then searched, fumigated and laundered, and stored in labelled bags in the storeroom. This was done to keep diseases from entering the prison, which was a real fear after an outbreak of bubonic plague in Brisbane in the early 1900s.
Personal details were then recorded, including photographs, weight and height, and fingerprints, along with information about sentencing and criminal records. A visiting surgeon conducted a physical examination of each prisoner at the first opportunity.


Gallery: Scenes from the Female Division 1903-21 (click to enlarge images) 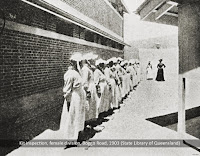 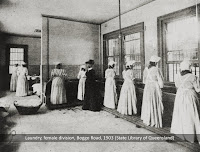 The cells in what is now E Wing originally had canvas hammocks, while those in F Wing had plank bedsteads and fibre mattresses. In the corner was a tin quart pot, grey branded blanket, a pillow and a coir mat. The cells had no heating in winter, and electric lights were not installed in the cells until 1912.

There was never any plumbing in the cells in this Division. Water for personal hygiene was cold and came from a bucket kept in a corner of the cell. Another bucket, provided with a lid, was used as a toilet. This arrangement created the need for a disposal and cleaning area in order to maintain a healthy environment. 3A Yard contained this facility.


The daily prison routine was signalled by the large bell located in the wall above the inner entrance gates:


There was no work on Saturday afternoons and Sundays and the prisoners were allowed to spend more time in the yards, where they could play approved games until 4 o’clock. Gambling games involving cards and dice were not allowed. On rainy weekends prisoners stayed in their cells.

For those with religious affiliations, Divine Service was arranged with the Chaplain. The female prisoners also received regular visits from the Sisters of Mercy, the Salvation Army and the Women’s Christian Temperance Union.

The prison bell also served as an alarm, and if the solitary warder on night duty in the Female Division required assistance she was instructed to ring the bell to summon help from the Male Division.

Prisoner clothing, 1903
The prisoner's uniforms were numbered and branded, and a badge worn on the right arm of the garment indicated what class of prisoner they were. There were two uniforms - one for summer and one for winter:

Summer:
In winter, the summer uniform was supplemented with one dress and jacket of brown woollen cotton drill serge, and one brown woollen petticoat. Most of the clothes were made at the prison itself, except for the boots which were made at St. Helena. The prisoners were also issued with a comb, soap, spoon and a towel.

The women had to have a regulation hairstyle, with the back hair divided and coiled up in a knot at the back of the head. The front hair was parted down the middle and worn off the face. Sometimes the prisoner's hair was cut on account of vermin or dirt.