Most of the early female inmates at Boggo Road have been described as 'victims of adverse circumstance'. Many were prostitutes, being single women with no other means of support. The kinds of offences that they were imprisoned for included:
The first four offences in this list were often coded charges for prostitution.

Some of the women had mental health problems and were sent to prison due to a lack of more appropriate detainment options. Most had multiple convictions. Almost all were working class.

Mary Rittler was a domestic servant who was first admitted to the prison as a 20-year-old in December 1909. She was frequently readmitted over the next several years on quite serious charges such as stealing, assaulting police, and once 'going armed in public so as to cause fear' (she had a revolver).

Her sentences were often extended with hard labour because of breaches of prison rules, including assault and insubordination. 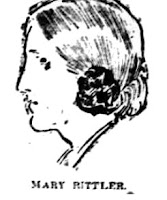 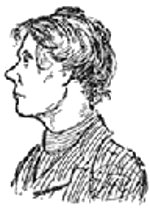 Annie Campbell (above, right), described as ‘a small, middle-aged woman with a small face and scanty brown locks’ was gaoled for twelve months in March 1911 for 'uttering a false document' - she had tried to cash three false cheques. Formerly a widow, she had remarried just two months before. (Read about her court case here). Unfortunately, 41-year-old Annie was pregnant when she entered Boggo Road. In August, feeling weak and in poor health, she showed signs of being in labour and was taken to the Lady Bowen Hospital. After a long labour she gave birth to a stillborn baby. Three days later Annie herself died. The official cause of death was listed as ‘Alcoholism, Cirrhosis of Liver and general debility. There were no suspicious circumstances.’

Margaret Blessington was a Brisbane woman who emigrated from England in 1874 as an infant. She had spent a lot of time in the women's gaols at Toowoomba and Fortitude Valley before arriving at Boggo Road in 1903. She served many short sentences at Boggo Road for drunkenness, obscene language and indecency (code for prostitution), reaching 69 convictions before being sent to Goodna Mental Asylum in 1910. She lived an institutionalised life until 1957, when she died in Dalby Jubilee Hospital, aged 86. Her story can be read in the book Intemperance and the Train of Evils.