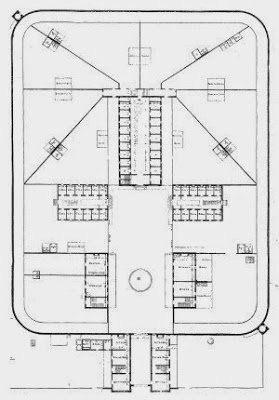 At the start of the 1880s there were two prisons in the Brisbane area, one on Petrie Terrace and one on St Helena Island. The Petrie Terrace facility was felt to be inadequate for future needs and was already being scaled down when construction on a new male prison began off Boggo Road, in what was then part of Woolloongabba (but is now Dutton Park).

HM Prison, Brisbane (or ‘Boggo Road’, as it was colloquially known) opened in July 1883. It sat rather grandly on a prominent rise and a visiting reporter described it as looking like ‘a country gentleman’s mansion within its own grounds’. The high redbrick perimeter walls were more imposing than any prison walls before built in the colony, and the building had the presence of a castle on the hill.

The first prison built there was used to hold short-term inmates and those awaiting trial. Longer-term prisoners were still sent to St Helena Island out on Moreton Bay.

Boggo Road initially consisted of a single cellblock, three storeys high and containing 62 usable single cells, although the number of prisoners held there was often double the intended capacity. At this time it was common for three men to be sharing a cell designed to hold only one. Fortunately there was plenty of room to expand inside the perimeter walls and two new cellblocks were added by 1887, each containing 36 cells over three floors. These were extended in 1890, creating another 48 cells. The prison was built with the 'radial' design popular at the time, in which the cellblocks faced onto a single central point, allowing for enhanced control of movement of the inmates.


There was also a new innovation in the form of an internal gallows. These were built inside the original ‘A Wing’ cellblock and were designed to enhance the privacy of execution. Hangings had been carried out in prison yards since the introduction of privacy laws in the 1850s, but it was not until the installation of the gallows at Boggo Road that the public could be completely prevented from seeing anything.

Despite this, the old timber gallows from Petrie Terrace were transported over and stored in a yard, and were used for one last time when three men were hanged together at Boggo Road in October 1883. This was Queensland’s first and only triple hanging. The internal gallows were used for the first time in 1884. Boggo Road became the colony's execution centre from that time on, hosting 42 of the next 43 hangings to take place in Queensland.


The workshops from the old Petrie Terrace prison were transferred to St Helena, and so in the earliest years most hard labour at the new Brisbane Prison involved destumping the surrounding land (making way for the neighbouring school which opened in 1884) and, for the younger inmates, picking oakum (old ship rope). A few worked at tinsmithing, carpentry, shoemaking and matmaking. This last trade in particular was expanded with the construction of matmaking workshops.

This new prison underwent massive changes over its lifespan. In 1903 a prison for women opened right next door, resulting in the original prison becoming known as the ‘Male Division’ while the other was the ‘Female Division’. It stayed this way until 1921 when the female prisoners were moved to a smaller nearby facility and both prisons were now used for the men. The Male Division was now ‘1 Division’ and the former female prison became ‘2 Division’, appellations that remained in place until the end, when 1 Division closed in 1992 after 109 years of service. It had actually been completely rebuilt in stages during the 1960s-70s, with the old redbrick structure being replaced with white-painted besser blocks and steel. This new 1 Division turned out to be not that well designed and during the 1980s it leaked prisoners like a sieve, leading to its eventual closure and demolition. But that’s a story for another day.