There have been prisons for women in Queensland since the convict era. These have generally been smaller - and sometimes more makeshift - than male prisons because the female prisoner population has always been lower than that for men.

1829
The first ‘prison’ for women was built in Queen Street in 1829, on the site of the present GPO, and was called the ‘Female Factory’. This was during the time of the Moreton Bay Penal Settlement, and the female convicts held there were made to sew, wash, and cook, and also make straw hats for the men. In the later days of the Penal Settlement they also did agricultural work at Eagle Farm, on the fringe of the settlement. They were also subject to punishments designed to shame them, including head-shaving, wearing iron collars, and solitary confinement.

With the convict era drawing to a close all the Moreton Bay women were taken to Sydney in 1839, and three years later the local area was opened up to free settlement, paving the way for the development of Brisbane. A total of 150 female convicts served time at Moreton Bay. 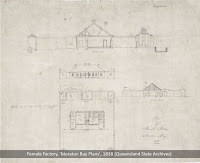 1850-70
Prisoners in 1840s Brisbane were held in various makeshift facilities before the former Female Factory building was renovated and converted to Brisbane’s first prison in 1850, and it held both men and women, housed in separate communal wards.

Inevitably the prison population outgrew the building in Queen Street, and this poorly-constructed and crumbling building was soon replaced by a newer prison in Petrie Terrace in 1860, which also housed both sexes. This new prison had room for 108 male and 36 female prisoners, with the women’s cells taking up half of one of the two main cellblocks.

It was based on the 'Auburn system' of discipline, in which prisoners associated with each other in silent labour during the day but were confined in isolation at night. The aim was for criminals to 'reflect on their crimes and reform themselves'. This was the emergence of contemporary methods of imprisonment in Queensland.

The oldest woman ever held at Petrie Terrace was 76 years old and was convicted of stealing clothes. The youngest girl was only ten and was sent there for stealing poultry.

1870-1903
Eventually the authorities realised that a combined male/female prison was too difficult to manage and so all the short-term female prisoners were sent to the often-overcrowded police gaol in Fortitude Valley (which had opened in 1863). In 1870 the other women were transferred to Toowoomba Gaol, where separate facilities from the men’s prison had been prepared. The residents of Toowoomba were not happy about this move. Despite being away from the men, the free mixing of different classes of female prisoners in 'associated wards' was still causing problems, even after the old Toowoomba courthouse was turned into an 'Industrial and Reformatory School for Women and Girls' and used for younger inmates in 1882.

An 1887 Inquiry into prison conditions reported that 'the evils of association both by day and night must prevail and frequently the wards are overcrowded'. These 'evils' included hardened criminals negatively influencing younger inmates, and same-sex sexual activity. Conditions at Toowoomba were so bad that it was decided to build a new, modern prison in South Brisbane, next to the existing men’s prison just off Boggo Road, which had opened in 1883. That new State Prison for Women was constructed during 1901-03, and opened on 3 October 1903. All the female inmates held at Toowoomba and Fortitude Valley were transferred to Boggo Road.