This article is reproduced with permission from Peter Dunn's 'Australia @ War' website at wwwozarwar.com

'Boggo Road... was used during WW2 as a holding location for troublesome military prisoners while they awaited their Court Marshall. Many members of the Australian Armed Forces were detained at Boggo Road Gaol during WW2. Military hearings were held almost daily in the prison concert hall. Many soldiers received their "Services No Longer Required" discharges which were affectionately known as "Snarlers". Most men were happy with this outcome when it was handed down.

In about 1944, a number of violent uprisings took place at the Army Detention Barracks at Grovely in Brisbane and at Warwick. The prisoners and the guards were involved in many a battle at these two locations. The ringleaders of these two uprisings were transferred to Boggo Road Gaol to await their subsequent Court Marshall. Two of these ringleaders had a particularly extensive record of military offences over their long service in the AIF. While they were at Boggo Road they requested permission to work in the prison. This was granted. They worked in the kitchen as cooks for the rest of their stay at Boggo Road. They worked hard with no complaints. The two men became well liked by the prison warders and their fellow prisoners. This was in stark contrast to the reputation that they had earned prior to this. 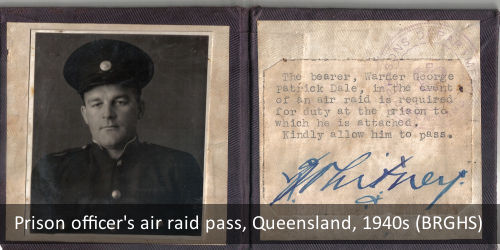 Roy Stephenson, who was at that time a Warder Clerk at Boggo Road, was firmly of the belief that the incidence of rebellious behaviour in Army Detention Centres during the war, was the fact that the enforcement of Army discipline meant that harsh measures were adopted against the prisoners collectively. The Service mentality would not allow prisoners to be treated as individuals. If one or two prisoners stepped out of line, all of the prisoners were punished. One notable prisoner held at Boggo Road was an American prisoner. He had been born in the Philippines and fought with the US Army as a sergeant in New Guinea. He was eventually captured by the Japanese. Some time later he was recaptured from the Japanese, but was found to be wearing a Japanese uniform. He was subsequently Court Marshalled and sentenced to death by hanging. He was detained at Boggo Road while his Appeals were being heard.

Stephenson befriended this American soldier, who turned out to be quite a likeable character. He admitted that he was a born loser and accepted his eventual fate at the hands of the hangman. He told Stephenson that the Japanese gave him two options, join their Army or be shot dead. His oriental extraction was one of the factors that influenced his ultimate decision. The American prisoner lost all of his appeals and his death sentence was confirmed. The American Military authorities asked if they could use the Gallows at Boggo Road. This request was denied. The Americans were astonished with the Australian decision and commented that one of their prisoners had been hanged in Pentridge Gaol in Melbourne. This prisoner was Eddie Leonski, the infamous 'Brownout Strangler', who murdered there Melbourne women. The Australian authorities indicated that because the offence took place outside of Australia there was no connection with the state of Queensland. Another reason was that Capital Punishment was no longer on the statutes in Queensland. The prisoner was flown to New Guinea a short time later where he was executed by hanging.

When the war ended the gaol was rife with rumours that Peace Remissions for prisoners would be announced. Within a few days the terms of the Royal Clemency were announced and about fifty prisoners were granted immediate release. Many others had their prison terms substantially decreased. In the rush to process the fifty or so prisoners it would appear that one too many prisoners was released. The prison authorities visited the forwarding address that he had given at midnight where they found Fred sound asleep after a big night out on the town. They explained to him that he had omitted to sign some very important papers connected with his release and asked him to return to the gaol so that his release could be made fully legal. Poor old Fred fell for this story, hook, line and sinker. When news of this event spread throughout the prison, there was much uproar. Many legal moves were made to have Fred released. He was finally released from Prison many months later. When he was initially prematurely released, Fred had not even served half of his fourteen year prison sentence.'