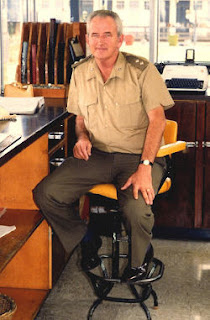 The following is adapted from an interview with a retired Boggo Road officer:

'On a regular day you came in between gates, you told the gate officer your name, he marked it off, you signed your duty sheet and went inside, and in the early days we had a muster. In those musters the Senior would come out and read your name off and tell you what post you are on, and away go from there. All the young officers that were there virtually never got a post because they were too young, knew nothing, to a degree, but we used to get tower duty on H Tower, which was on top of the remand section. That was our main duty programme was H Tower.

On a normal day, on a complete prison run, you’d unlock a Wing, there’d be three officers in the wing, top, middle, bottom was the wing officer, you were given a set of keys that had 14 keys on it, and those 14 keys unlocked each one of the cells that were on each floor, and they used to go right to left, and if you misplaced where you were you had to start right from the beginning again to try and work out which key goes to the next one.

Now that was your normal day, you’d unlock, you made certain the prisoners were all outside dressed properly, and in those days they had their toilet tub, they had to have their towel folded up and put in their belt, their hat on, their box that they carried all their precious items in, and they were there, and when the Wing officer moved off his landing and you were on the middle landing you used to say to them ‘Right left turn, quick march’ and they used to walk outside through the door of the cellblock and salute, and if they didn’t have their towel in the right position the Chief and Senior used to stand them over beside the front of the cell and after muster was finished they asked why they didn’t have it there or why they didn’t have their towel, why it wasn’t in their belt, and a lot of times they were charged for not having it.

Now the part of the duty within the prison itself was the searching of prisoner’s cells, and in there anything that was contraband you would take away from them and write it in a search book, and if they had too much tobacco you’d get the prisoner up and you would charge him for having excess tobacco. If they had matches there that were split, that is one match split into four, that was a chargeable offence because they weren’t allowed to do it. It was damaging government property. Now tobacco in those days they were given a packet of two ounce tobacco, some got two ounces, some didn’t get that amount, but the two ounce packet of tobacco, plus papers, outlasted a box of matches, so to be able to smoke the tobacco and light their cigarettes they had to split matches. Virtually every one of those matches that was spilt in four, lit... which means they got a smoke out of every match that was there. So there was 50 matches to a box and by the time they split them they had 200.

Now, on a chargeable offence if you got somebody that had too much tobacco, spilt matches or other items that were not deemed legal they were charged. You would fill out a charge sheet to them, tell them what they were being charged for, they then front the superintendent and the superintendent would read it and ask them if they were pleading guilty or not, and they would finish up with half rations. Seven days half rations, two days half rations, whatever, or they could finish up on bread and water. In the early days there weren’t too many people got put on bread and water because it was run out, it had finished. Now half rations meant whatever their meal was, they got half of it, they didn’t get anything else. Their bedding was taken off them of a morning, they just had the mattress in there, and their bedding did not go back into their cell until that afternoon for them to make their bed. They were not allowed to smoke, all their cigarettes and tobacco were taken away from them, they were given an hours exercise inside the cellblock. Their toilet tubs were taken down the yard by the sweeper, and their cell had an enclosed area up on top where the door was, they had bars, and they’d go along and put a board over the top of that so prisoners couldn’t go in there on a muster time and flick a cigarette in the window to them.

That was mainly your programme, by the time all that got done and you had your meals and everything, it was just about time to go home at 2 o’clock in the afternoon.'