The following is extracted from the Telegraph (Brisbane), 12 July 1927:

'The average law-abiding citizen has certain well-defined impressions of life in the gaols. A representative of "The Telegraph" was allowed to visit His Majesty's penal establishment at Boggo Road. On the bright, sunny morning the institution seemed more like a well conducted factory than a prison. The whole place was scrupulously clean, even to the huge brass padlocks that secure the outer gate. Every yard and cell, every doorknob, showed the effect of the broom and the mop and the polishing rag.

The prisoners were at work on their various allotted tasks. 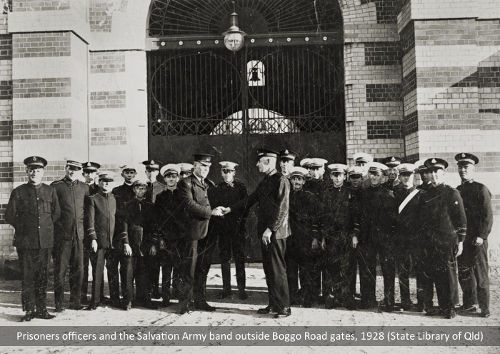 Entering the main gales of the prison, in which the first offenders and short sentence men are housed, the reporter was greeted by a sight that immediately suggested a military barracks. In the centre was a quadrangle containing some well-kept garden plots. A prisoner, clad in white dungarees and a blue serge coat, strolled casually through the yard as if he had not a care in the world, as perhaps was the case. Another gazed at the visitor covertly, but immediately came to the salute as he saw the figure of Major Pierson, the superintendent of the prison, emerge. A flight of stairs off the quadrangle leads to the hospital, where two men lay comfortably in bed reading. Nearby the convalescent pottered about in the hospital garden. One was lazing in a canvas chair in the sun, enjoying a book.

A visit to the cells in another portion of the building showed spotlessly clean quarters, in which hammocks and blankets were neatly folded, not before they had been thoroughly examined for implements and the like. A small table, on which were two books - each prisoner is allowed two books per week from the prison library - completed the cell furnishing. The cell of a well-known Brisbane criminal revealed some taste in wall decorations. It was explained that long sentence men are allowed a privilege in this respect. The same man was seen later placidly hanging out the clothes - Monday evidently being washing day at prison as well as well as at home.

A man in gaol has not a great deal of idle time. At 6.20 a.m. he is called by a bell, to dress, and ten minutes later the cell door is opened, and he goes to the yards and wash, and to use the shower bath, if he feels inclined.

At 7 a.m. breakfast is served, and if the odours that emanated from the kitchen were any indication of the fare that is provided then they have little to complain of in the way of food. At 7.30 a.m. work commences. The work done in the prison is enormous. Brooms, fibre mats, mattresses, tinware, boots, shoes, shirts, trousers, and even warders' uniforms are the results of their labours from 7.30 a.m. to noon and from 1 p.m. to 4.30 p.m. They then have a wash and clean up and have the next hour to themselves. Some play draughts and chess, others use the time in bettering their own education.

At 5 p.m. they go to their cells and the lights are left on till 8 p.m. Such is the prison routine in the week day. On Saturday afternoons the men are allowed the freedom of the exercise yards, and on Sundays there are two church services which usually they all attend, though attendance is not compulsory.

In a corner of the prison two men were observed sitting in the sun with broad-brimmed hats lighting out a game of chess. They were unable to work, and so were allowed to amuse themselves as best they could.

It was learned that many of the prisoners spend their leisure hours in the study of Pittman's shorthand (they practise on slates), arithmetic, mensuration, algebra, and bookkeeping. Electricity and motor mechanics do not escape their attention. On behalf of one apartment was observed a copy of a well-known encyclopaedia on motor mechanics. It was stated that the prisoner in question could tell more about a motor-car than many a skilled tradesman.

Many of the men who have gone to the prison without a means of earning a livelihood - a possible reason for their presence there - have become expert in the various trades. One had risen to be the chief cutter in the tailoring department. When he went to the prison first he scarcely knew, which end of the scissors to use.

The means for recreation are necessarily limited, but time is often found for music. There are several organs in the institution, and at times prisoners are allowed to rally round the instrument and practice hymns and other selected music. It is stated that the men are never without the services of an organist amongst their number. At times there is even revealed exceptional talent. A Salvation Army band occasionally enlivens proceedings with a concert.

A visit to the library showed that it is well stocked with good reading matter. A prisoner is in charge of it, and he informed the visitor that travel and educational works are most in demand.'