By the 1920s there was a need for change in the Queensland prison system. With crime rates decreasing after World War 1, the daily average number of inmates across the State hovered around the 300 mark, despite there being accommodation for 966.

The authorities decided to 'downsize' by moving most of the prisoners, staff and workshop equipment from St Helena Island over to Boggo Road in 1921. The island prison would remain open, but used for 'the cases with the best hope of reclamation'. In other words, the worst inmates were sent to Brisbane. 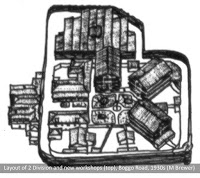 Boggo Road itself was reorganised by moving the female prisoners - who for years had rarely filled even a quarter of the available cell space in their 1903 prison - to a small timber building on the south of the prison reserve. This structure had once been a VD hospital, located within the grounds of the Brisbane General Hospital. Both the main prisons were now used for males only and became known as the No.1 and No.2 Divisions.

The new workshops were opened in 1929, on the eastern wall of 2 Division. These were connected to 1 Division by an underground tunnel and in this way provided work for prisoners in both divisions. The former workshop block of D Wing was converted into a cellblock, so 1 Division now had A, B and C Wings, while 2 Division had D, E and F.

The prison stayed like this until 1950, when the female prisoners were transferred to another building on the reserve. This had formerly been the VD hospital, now rendered obsolete by the discovery of Penecillin. Their former prison became No.3 Division in 1953, used to house short-term inmates confined for vagrancy or drunkenness.