Gallows Beam at the Supreme Court of Queensland 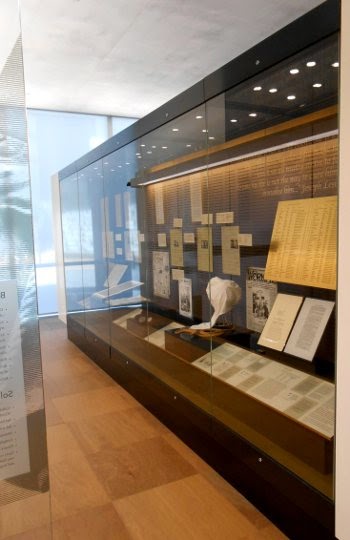 (UPDATE: This exhibition closed in early 2015 and the gallows beam was returned to the Commissariat Store, William Street, Brisbane.)

A museum exhibition about the end of hanging in Queensland opened in June this year at the new Supreme Court buildings on George Street, Brisbane. Capital punishment was abolished here back in 1922, and this exhibition marks the centenary of the last Queensland hanging, which took place in Brisbane in 1913.

I had helped the Supreme Court exhibition team with getting this together, including sourcing exhibit items, writing an article for the catalogue, and editing and advising with other text, so I personally found the final product to be both interesting and familiar. The first thing you see as you approach the entrance to the Sir Harry Gibbs Legal Heritage Centre (where the exhibition is housed) is the central section of the old Brisbane Prison hanging beam, first used in 1885. This mighty piece of triple-hooked timber is from the collection of the Royal Historical Society of Queensland and I used the beam back in 2005 for my 'Gallows of Boggo Road' exhibition, so it was good to see it still doing the rounds as probably the last genuine prison artefact of the hanging era.


I emphasise the word 'genuine' because the next case holds a rusty barbeque plate made from a metal plate that was 'allegedly' once part of the gallows trapdoor. Apart from the fact that the trap was made of thick timber slabs, the evidence for the origins of this piece is dubious. Even if this was the real thing, it has been sadly neglected and the metal is now a mass of rust.


One issue for the Path to Abolition team was the apparent lack of hanging artefacts, and one of the early ideas was to construct a full or half-scale replica gallows for display, but perhaps a massive set of gallows (these things were about 7 metres high) in the Supreme Court entrance foyer wouldn't do too much for the image of Queensland, especially when the State led the way in abolishing the things in the first place. Gallows or not, it did allow me an eye-catching article title anyway.

The exhibition has a few other less startling replica items. The one shown below is a replica of the kind of white hood that was placed over the prisoners' heads prior to hanging, and next to it is a rope spliced with a washer (as was used instead of a knot). These items were made specifically for the 'Gallows of Boggo Road' exhibition, and although they are simple objects it is great to see them still being used in what is now their third exhibition.


Another replica item - this one produced by the Supreme Court team - is the hangman's disguise, as worn by executioners attempting to conceal themselves from those present at the hangings. This one consists of a black felt hat, some spectacular 19th-century goggles, and a false beard.


The third item of clothing here is actually genuine. This is the black cap as worn by judges handing down the death sentence at the end of a trial. A striking contrast to the white hood of the prisoners.

The exhibit manages to succinctly tell the story of hanging in Queensland and of course the path to abolition. It does this with original documents (such as petitions), some striking illustrations from newspapers of the day, and copies of prison records. The stories of five inmates involved in controversial cases that stirred up public opinion are also highlighted. At first I was struck by the fact that the case studies are all white people, when most of the executed were not white, but then you have to remember that public opinion of the time was more likely to be mobilised against the hanging of white people.


Being a 'Hanging in History' specialist I was right at home in this exhibition, and the team have done a very good job in getting the material together and telling the story in an accessible way. If you're in the neighbourhood, you should definitely pop in for a visit.

('The Path to Abolition: A History of Execution in Queensland' exhibition can be seen in the Sir Harry Gibbs Legal Heritage Centre on the ground floor of the Supreme Court building on 415 George Street, Brisbane. Go through the security check at the main doors then turn right.)