Dutton Park is a small suburb situated between Woolloongabba, Highgate Hill and Fairfield, but it has a surprisingly rich and unique heritage because back in the 19th century most of the local land was government reserves. Queensland was still a new colony and Brisbane was beginning to expand rapidly, and the government required land close to the city for a number of government facilities. The area they choose is shown in image A below.

A survey was undertaken there by Charles Rawnsley in 1863. A huge complex of reserves was created, covering almost 140 hectares between the modern Annerley and Ipswich roads and the river. 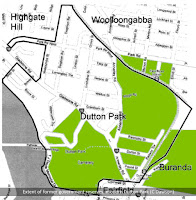 There were up to ten different reserves (see image D), including:

South Brisbane Cemetery (1866 - )
The first reserve to be actively used was the cemetery, which was reserved in 1866 and first used in 1870, and is now the oldest surviving municipal cemetery in Brisbane. About 100,000 people have been buried there.

Deaf, Dumb and Blind School (1883 - 1988)
This school opened in 1883 as the 'Brisbane Institution for the Instruction of the Blind, Deaf and Dumb'. It later became the Queensland School for the Deaf and this old building was demolished when a new school opened on the same site (next to Dutton Park railway station) in 1973. The school closed in 1988 when the children were placed into the mainstream school system.

Orphanage/Diamantina Hospital (1883-)
The Diamantina Orphanage was established in 1883, and after several changes of function it became a hospital for chronic diseases in 1897. After a major rebuilding programme it was renamed the Princess Alexandra Hospital in 1959. The Diamantina Museum, in the only original building left from the first hospital, is worth a visit.

The prisons (1883 - 2000)
There were a number of different prison buildings that came and went on this site over time. The first, shown below, was built in 1883 for male prisoners.And a new prison opened next door to the first prison in 1903 to hold female prisoners. This is now the only remaining prison building left at the site.

Dutton Park State School (1884 -)
The school reserve next to the prison was cleared by prison labour, and the school opened in 1884 as the Woolloongabba Mixed School, later becoming the Dutton Park school.

Dutton Park recreation reserve (1884 -)
This park is where the suburb gets its name from. It was set aside as a recreation reserve in 1884 by Charles Dutton, who was the secretary of lands, and was leased by the Brisbane Tramway company in the 1900s. Their trams ran to a nearby stop and the company tried to boost patronage by turning the park into a leisure resort by building kiosks and organising attractions such as the ‘Continentals’, outdoor shows which combined live acts and silent movie screening.

The park became so popular that nearby housing became known as the name ‘Dutton Park Estate’. This name was soon being used for the local train station and school, and although it became a distinct area within the suburb of Woolloongabba, the modern suburb was not formed until the 1970s.

Animal pound (1887-1920s)
The next reserve to be used was the animal pound, seen below in green, which was used for confining stray animals, including stray cattle and horses which were wandering around the suburbs. This opened in 1887 across from the cemetery. This was under the charge of a police-appointed poundkeeper, a position originally paid for through animal sales. There was originally no water at the pound, and the animals had to be driven twice a day to nearby waterholes before a trough and water mains were installed in the 1890s. It was closed in the 1920s and its former presence is marked in the name of Pound Street.

Some other reserves
Other reserves included ones for the police, a school of arts, and a road metal quarry (now Quarry Street).

Some of the reserve land was later developed into streets, but places such as the hospital and school have survived and are still being used for their original purposes, as is the cemetery, which along with Boggo Road Gaol is an important heritage place.

Back to Local History
Back to History Vault