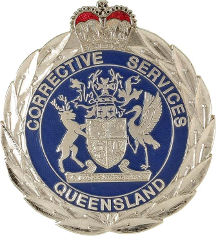 The following is adapted from an interview with a prison officer who started his career at Boggo Road in 1989 (the same year that No.2 Division closed) and is still serving in the Queensland prison system today:
'What was it like to work there in ’89? It was interesting because when you walked in it was like going to another world, because you’d walk through the little side door, you’d knock on the door to go in, then somebody would look through the window at you, you open the door and walk in and just like the whole world changed, it was like completely different when you walked in there.

There was a lot of camaraderie between the officers. It was just when they’d gotten lax with all the strictness, all the parades and all that sort of stuff, they still had them, it just wasn’t as bad, as strict as what it was prior to me starting there because I was basically the first of the ones with the blue shirts, whereas everyone else who had worked there before me had all been in the khaki and swapped over to the blue.

It was always good because there was that distance, the crims weren’t always in your face all the time, not like now. The crims were basically able to get away from you because they could go out and hide in the yard or stay away from the yard so there was always the distance so it was a little bit better but it was probably more confrontational sometimes because the crims just always wanted to arc up, especially if they knew you were new, so they would always try something on with you all time, to see how you were.

It was always a place of overtime, you couldn’t believe the place, there was that much overtime there... some of the guys that start these days don’t understand how much there was. Morale was pretty good, a lot of us got on but the funny thing was you had like a 118-week roster and there’d be weeks you wouldn’t see somebody so you’d think they gone on holidays or they’d moved somewhere else, you wouldn’t see them. You’d work with them for three weeks or three months then you wouldn’t see them for three, four weeks, three months, six months, just because the way the rosters worked so it was quite interesting. Compared to today it was a lot more labour intensive because of the amount of work you actually had to go in and deal with the crims, all the keys and that you had to do, less paperwork actually back then than there is now. It was funny going there, you had breakfast, lunch and dinner supplied if you worked all day, if you were on overtime you knew what your meal was, it was going to be steak and eggs. You got on fairly well, like I said morale was the best thing, everyone was quite happy to be there.

Usually the routine was you came in, you usually signed on and reported to the gate officer that you were there so he could put you into the gate book, and then you’d go off to your Wings. For arguments sake, I could be J, K and L Wing, which was on the left hand side when you went in the gate and what would happen is, usually two of you would go straight off to breakfast and the other couple would hang around, get a couple of your early workers out, he’d clean the yards and all sort of stuff. Once that happened you sort of swapped over, the others who come down, you went up and had your breakfast, you come back down and then you start getting ready for unlock.

There was... not necessarily a briefing, it was probably more like just if something had happened, and then you just went into the routine of unlocking where you’d go down there and be an officer and stand on each landing and they’d call them out and you’d unlock the cells as you went along, the crims would come out and you’d shut the doors behind them. Then they’d do the muster and basically they could go on with whatever they wanted to do after that.

We just did all the Wings and then we just went to the daily routines, organising them when they were going to go down for breakfast, which was set times and stuff... Certain officers had certain jobs, like a couple of officers when they went for breakfast or lunch, they stay at the Wings to keep an eye on the Wings and be ready for anyone that had to come back early or something like that. The other officers, we’d escort them basically up to the Mess, we’d count them into the Mess and they’d pick up their cutlery and everything and on the way out there’d be two of you standing there and you both had to watch them throw the cutlery into the buckets as they walked out the door from the Mess going back down to the area.

And pretty much after that it was just, if you got a phone call that somebody was wanted you’d give them a yell, call out for whichever one it was, then give them a chit to say they were allowed to go over to wherever, visits or programmes or wherever it was, and basically it just ran like that most of the day, we did our meal release, once we started doing meals crims pretty much didn’t really go anywhere as long as they absolutely had to, and then it was pretty much the same for the afternoon. Go in for dinner, once they had their dinner come back call out, once they were, we call out ‘Lockaway’, we usually go along open all the cells, they’d go into their cells, we’d do a headcount, lock it up, all the doors had to be on 2 or 3. Put them on 3 for a night-time, go around there’d be two of you, the other officer would check and make sure you got them all on 3, and then you’d give your states and that was it. You basically hung around the reception desk until the supervisor either allowed us to go home or he found enough volunteers to stay on overtime.'