The following is adapted from the July 1951 article 'Industry, Discipline Keynotes of Modern Gaol' by Courier-Mail reporter Pat Lloyd:

'DEPUTY Comptroller of Prisons (Ex-Detective Sergeant Stewart Kerr) acted as guide to Courier-Mail reporter P. D. Lloyd during a recent inspection tour of Boggo Road Gaol, South Brisbane. Both Mr. Kerr and the General of Prisons (Mr. W. Rutherford) emphasised that prisoners were not sent to gaol to be punished, the punishment was in just being there. They were cut off from the outside world by a maze of huge walls and iron bars, unable to do just what they wanted, and had to live a life of sheer, grinding routine guaranteed to make any first offender think twice before again risking his liberty by resorting to crime. 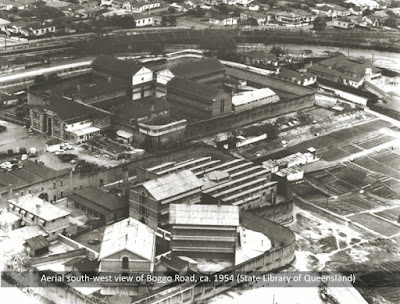 WHEN a prisoner stumbles down from a Queensland Court dock after being sentenced to a term of imprisonment, he does not face a future of breaking stones and wearing crude clothing emblazoned with broad arrows.

Far from it. In these enlightened days he will take his place in one of the modern prison industries, producing commodities worth commercially more than £75,000 a year. He will feel low, of course, but everything will be done to ease his mind when he enters gaol. If he goes to Boggo Road, Superintendent W.J. O'Connor will interview him personally in his private office, quietly explain prison routine to him, and do everything possible to nullify the prisoner's sometimes severe shock at what lies before him, particularly in the case of a "first timer.”

If a prisoner has committed a serious crime and received a lengthy sentence, he will become a "long term prisoner." As a "long-termer" he will have additional rations and facilities not available to short-term prisoners. But his main compensation will be that if he resigns himself to his punishment and settles down to the regulated prison life, he will have the opportunity of leaving his cell finally as a qualified tradesman or accomplished student.

I spent an afternoon recently on a tour of inspection of Boggo Road Prison. I was stunned to find that the average man's conception of "hard labour" is a non-existent feature of the establishment. The hardest work done is wood chopping, and that by only a handful of men fitted for the work. I found that the prisoners actually work only about six hours daily, that they eat not the fabled bread and water, but a well balanced, medically prescribed diet similar to army food.

But don't think that their life is all milk and honey. They are never allowed to forget for one minute that they are prisoners paying a debt to society. Discipline is the keynote, and the prisoner learns to appreciate that he is merely a very small cog in a big machine. He must stand to attention when officials enter his work place or cell, must salute officials at certain times, must not speak unless spoken to, and must not speak at all to his fellow prisoners until he is in the exercise yard.

About 300 male prisoners were working throughout the prison at the time of my visit. This is approximately the full capacity. When space is taxed there, inmates are taken under escort to other State prisons. "Good conduct" prisoners may also earn the privilege of a transfer to a prison farm.

In the workshops, clad in grey tweed or blue dungaree trousers, with flannel shirt or grey flannel coats, prisoners were all working silently, industriously, and efficiently. Dozens of articles ranging from humble tin mugs to smart navy blue suits were under production. Take a good look at the finery decking the horses of the Queensland Mounted Police next time you see them. It all came from the prison saddlery shop. As we walked through the shop, new equipment was being made especially for the mounties at the Brisbane Exhibition. Housebreakers, sex offenders, false pretenders, and men convicted of every crime on the calendar were there, neatly trimming leather, stitching or polishing.

In another section other prisoners were cabinet making. Beautiful office desks, tables, inlaid ink stands, and large filing cabinets were being turned out. This furniture would grace any office, in fact, several Government officials, including police administrators, have insisted on having full suites of gaol-made equipment in their offices. One of the prison's main workrooms is devoted to tailoring and other general cloth work. Here the scene was one of buzzing activity as prisoners leaned over their machines, snipped with scissors, guided buttonholers, and sorted and checked finished work.

I remarked to the Deputy Comptroller of Prisons (ex- Detective Sergeant Stewart Kerr) on the small number of youthful prisoners. He told me most of them were at school. He added that they were kept apart, as far as possible, from the older and more experienced criminals. Another major prison industry is the production of boots, shoes, and slippers. In this section prisoners become adept at repair work and the handling of machinery common in most boot making establishments.

While their handiwork serves a useful purpose in supplying hospitals and institutions, prisoners themselves are gradually being moulded into useful citizens, qualified tradesmen fit to take their place in industry outside the walls. A new scheme, the brain child of the Comptroller-General (Mr. Rutherford), will ensure that an ex-prisoner does not have to steal during his first few weeks of liberty, when he may find accommodation costly and the price of a meal beyond him before his first pay day. The new scheme is for prisoners serving 12 months or more. In addition to their 3d. a day gratuity, they will receive, if they live within the prison regulations, an extra payment of 10/ a month. This scheme, which is exclusive to Queensland prisons, has exceeded all expectations of officials interested in rehabilitation of prisoners.

At present there are not six "repeaters" (previously convicted men) in Boggo Road. On a prisoner's good conduct rests his opportunity of a remission of part of his sentence. The Prisons Act provides for remissions of up to one quarter of his sentence in such circumstances, but even more liberal remissions may be granted for exemplary conduct and industry. Most prisoners avail themselves of these concessions, and it is very rarely that serious breaches of prison rules occur.

The gaol also has a department for the manufacture of tinware and kitchenware. These utensils, along with other gaol-made property, all go to Government Departments or institutions.

In the prison school, Mr. George Lockie, B.A., of the State High School, instructs inmates in a variety of subjects. Though most of his pupils are young, older men may also apply to attend. Mr. Kerr said that many firms outside were ready and anxious to employ students and craftsmen from prison when they were released. As our party walked to the prison bakery, Superintendent O'Connor told me the accent throughout the prison was on cleanliness and hygiene. Looking round later, after inspecting several cells at random and looking through all the shops and yards, I could not dispute his statement.

The prison bakery was a real eye opener. Six hundred double loaves were being baked daily. To a considerable extent these prison industries offset the annual cost of conducting State Prisons. Yet, frequently, when a murderer is sentenced to life imprisonment, the comment is heard: "Why didn't they hang him? Now he'll just be another load on the tax-payer." That is not so. As prison officials say: "Gaols are an essential part of any community." And when my tour of Boggo Road Prison concluded, I was well satisfied, that the prisoners there were helping to relieve the tax-payer of some of his load, as well as serving out their time for whatever offences they committed.'