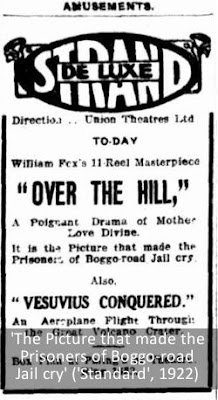 Moving into the 1920s, the great reforming prison governor Arthur Peirson introduced a range of programmes into the Boggo Road schedule with the aim of improving the morale and potential for the rehabilitation of inmates there. Workshop facilities were improved, library collections extended, correspondence rights relaxed, and the prisoners were even treated to even live music concerts and movie screenings. As Peirson wrote in his prisons report for 1922:


'Prison life, by its monotonous routine, must necessarily have a deteriorating effect on prisoners. such a life, running as it does without modification, acts depressingly on the prisoner, with a view of minimising these hardening influences, music and an occasional picture show have been allowed with most gratifying results.

My thanks are due to Brigadier Condon for his goodness in placing the Salvation Army Band, which is, by the way, a very good one, at my disposal to render musical selections at two or three of the prisons on different occasions; and also to the City Band, which has gratuitously favoured me with their services on one occasion for the object referred to.
I heartily give thanks also to Mr. Munro of the Fox Film Company, and to Mr. Scantlebury, of the Australian Film Company, for showing, to a great advantage, to the long sentence prisoners in Brisbane Prison three or four highly educational pictures. Such pictures have a great power for good.' 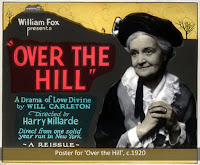 The first movie shown in the prison was the popular silent picture 'Over the Hill', in which the hero is a 'black sheep' son who returns home to save his mother:


'PICTURES AT BOGGO-ROAD. For the first time in its history prisoners of the Brisbane Gaol were entertained at a picture screening on Saturday afternoon, when Mr. Munro of the Fox Films, screened ‘Over the Hill.’ Mr. Huxham (Minister for Education) and Major Peirson (Comptroller-General of his Majesty’s prisons), were present at the screening, together with about 80 inmates of No. 2 prison. The picture took fully two and a half hours to present. The story is that of how a mother who, after bringing up her sons, finds them turn away from her, degraded, impoverished, and worthless. But one son remains true to her, and about these two the story turns. After the screening Mr. Huxham said that the moral effect of the picture was wonderful, and felt sure that it would uplift all.' (Queensland Times, 8 August 1922)

The music concerts at Boggo Road were of the sacred or classical kind, obviously chosen for the 'moral betterment' of the prisoners, and in the moribund confines of the prison it was well received.


'Seated in the courtyard of No. 2 gaol at Boggo-road on Sunday afternoon, eighty prisoners serving long sentences for various crimes, were treated to sacred band concert… When the idea was mooted, the Comptroller general of Prisons. Major Pierson, readily fell in with it. So when the Salvation Anny band marched up to the gaol it found its strange audience awaiting it in the best prison clothes. Major Pierson was also present. For about an hour prisoners and warders listened to pleasing band music. At the conclusion Major Pierson called for three cheers for the band, and the hearty response of the prisoners could be heard half-a-mile away.

"No," said the Comptroller General when questioned yesterday, "this is not the first time a band has been here; and I hope it will not be the last We have had a band over at No. 1 gaol (the short sentence prison) and at St. Helena, but not for a long time. I think that for men undergoing long sentences a concert is a splendid idea. It takes the minds of the men into higher channels. In fact, I look upon it as one of the elements of reform, and reformations, all aiming at the uplifting of the near future to advance in other directions, all aiming at the uplifting of the prisoners. Already we have started prison choirs for the various denominations, and these have given an added interest to the church services held each Sunday. There is a harmonium at the establishment, and as some of the men have fine voices, the effect is most pleasing.' (Morning Bulletin, 5 May 1922)

Concerts and movie screenings became a regular part of the Boggo Road calendar for decades to come, with the 'Monty Bloom Concert and Vaudeville Company' being an early favourite, and the new 1970s prison even boasted its own 'concert hall'. Further entertainment was provided by the installation of wireless radio in 1936 (first used for an Anzac Day commemoration) which also served to provide educational listening for the inmates. A speaker was installed in each cellblock.

A regular programme of lectures and debates were in place by the 1960s, and during the early 1970s televisions were installed in exercise yard shelters.