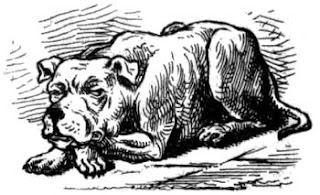 (These articles are reproduced from the Queensland Figaro, January-February 1883, and describe aspects of life in HM Prison, Brisbane, which at that time was located at Petrie Terrace. Most of the series was written from the perspective of the walls, in an 'if these walls could talk' scenario, but this particular article came from the imagined perspective of a prison guard dog. The prison at Petrie Terrace closed in July 1883 when it was superseded by the Boggo Road prison.)

"My name is Rory. I was bred within the walls, and within them I am like to die. I have a passing recollection of my sire; he too was a Rory and knew his way about among the prisoners. He taught me a lot; so too did the prisoners. There are other dogs here besides me but I'm the biggest and strongest and savagest, and can boss the crowd. That's one thing I always found the rule - the weakest goes to the wall.

I knock about amongst prisoners and hear their talk, but I chiefly affect the cookhouse what may not be first class butcher's meat; is equal to my requirements. Very comfortable, as things go, the cooks make themselves. They are well-behaved men - sort of ‘superior’ prisoners in their own estimation, but sly, sir – devilish sly.

There is a chief cook and a ‘hominy’ cook and the 'screws’ cook and a washer up. The turnkeys are called ‘screws’ because they screw out life on so little tucker. The two greatest rascals ‘inside’ are the chief cook and the screws cook. What they don't know isn't worth while for a dog to pick up, and what they can't steal (only they call it having ‘share of what's going.’) Bill Sykes, the Artful Dodger, and Charley Bates couldn't manage between them.

The chief cook draws the gaol rations and ‘sorts’ them. The best of the meat, the best of the ‘spuds’, and the best part of everything that he gets from the ‘store’ sticks to the kitchen ribs, but I will do them the justice to say they are always ready with a pot of tea for a new-comer, and a ‘feed’ as well; or if a man is sick what they can do to help him through they do.

The screws cook, cooks the turnkeys' meals, and ‘sorts’ their tucker. He works at an American stove and is very smart at it, chiefly when it's for the kitchen. Take him all round it is to his advantage to stand well with turnkeys, and so he looks after them well enough.

The chief cook gets up at 4 a.m. and carries on his own little games, combined with his work, until half- past 6 o'clock. There was one man I knew during the last eight years who was an ingenious sort of a cure. He was ‘in’ for selling illicit grog, but he carried the joke further and made it on the premises; fiery stuff that made your head reel it was, but these spirits are not allowed on the premises, and the smell of a brandy bottle is reckoned high. He was a mean man and when he was going out destroyed the apparatus so that nobody else should have his head reel. He slung some hot water at me one day, and I tried to get him found out by going down mornings to the kitchen - when he was at it and howling so as to bring the warder round but he was so cool and had the whole thing so neatly set up that he'd stand talking to the turnkey for half-an-hour with the grog brewing under his nose all the time.

I have been in the yards where the ‘old man’ grows all his vegetables - peas and beans and carrots and cauliflower and that sort of tuck - and I've seen the screws' cook come hurrying along like greased lightning and he'd get back to the kitchen the wag of a tail chock-full of green stuff, legs of his trousers and all. Smart boy he was, rough as bean-straw, but with a grand heart and always looked after me. No wonder the soil within the walls bears an indifferent reputation for effective productiveness.

The chief cook has to attend to the Doctor. It is no odds if he has to leave cutting up the rations to dress a putrid sore - gives him a taste for dinner.

All prisoners go before the Doctor on entering the gaol. In spite of many years’ experience of prisoners the good old gentleman is more than occasionally imposed on. There are men who never go near him except they are obliged by real debility or sickness, and when they do he looks on them with suspicion whereas a talkative ‘gammoner’ will very likely get better ration than is his due, if he only asks it in a sufficiently persuasive way. As to medicine the unfailing remedy is castor oil, salts, ‘calomel, jalap, and gingers.’ And the usual, complaints are of two or three classes only. Want of appetite is not one of them.

Prisoners are not worth much medical attendance, and they are such awful humbugs as to their ailments, that it is no wonder the doctors refuse to believe any. I know a man who went before the medico once in the two years he was within the walls, when from sheer, weakness he could scarcely crawl about, and he got a dose of aperient medicine to cure it which he carefully administered to me in a piece of raw meat and it suited my complaint to a nicety.

I am not very much interested now with what they do inside the cookhouse. I cruise round at night and catch rats, but sometimes during the day I make a tour of the yards. I used to see a deal of bullying and petty tyranny, and I hear as much bad language as ever, but since they took away the workshops and sent all the prisoners away too things are very quiet and nobody don't seem to care. But there were times when they cared. They gave me 60 days solitary once for biting another dog. It wouldn't have mattered if it had been a prisoner.

If I was a bit younger I should be full up of gaol, but I'm an ‘old hand’ now and used to it. There was a time when a swim in the cool water would have done me good and I should have enjoyed it, but they took to sending me to the butcher's shop with a kit for meat, and I had to fight so many other dogs doing it I gave it best and am satisfied to stop inside.

There I can study human nature as I bask in the sun. I can see from month to month and year to year the constant repetition of the old, old story of careers and crime; from what little they began; how a second offence follows on the expiration of the first, until at last I see the old grey bearded man, with slouching gait and bag under his arm, come shuffling in and then I know that next morning another human being will have been sent to render his account to his Creator.

There I can lie with my head resting on the bars of the great iron gates and see the pitiful interviews which take place between visitors and prisoners - the wife in the agony of her faithfulness; the mother in the agony of her tenderness; the shaken, broken voice of father, brother, nay even of a son. I can see, as I did once, a cab drive up to the outer gate and a pale, emaciated woman lifted out and carried into the office, too weak to stand, too weak to move without help - at death's door. And this last effort she made to see a prisoner - her husband. God alone knows what her agony of mind must have been to break her heart and her health thus. None was present at that interview but me. I never wish to see or hear of another like it. The poor, broken-hearted wife gasped but few words - the yearning of her soul towards him who had wrecked her life was too great for utterance. And he, though he once was called a gentleman, met her with inhuman savageness. A scream brought the warder on duty to the room. The prisoner was re moved. The last words were never said, and a few days later she was a corpse. But, did that man care? Pah! Such men as these are brutes. Terrible scenes are these - many as I have seen of them. But who shall say they are not wisely ordained?

And what brings men within the walls? The two grand passions of avarice and drink. Search the records of the prisoners and their previous careers. What do their crimes spring from? Passions naturally, but which could be easily overcome, influenced by drink. Cold-blooded crime is rare. Is it any use to warn, to add one more word to the thousands already written on the subject? It may not be, but I would fain add one line of warning, especially to those whose life is all before them, and who may by a very little effort now withdraw themselves from the edge of that whirlpool whose current will inevitably drag them down to ruin and disgrace. For as surely as they are weak-minded enough to allow themselves to be drawn into the first little slip so surely will the descent from day to day become easier until they are suddenly face to face with the fact that the strong hand of the law is upon them, and that they are within the walls and on that follows months or years of anguish to themselves and all connected with them, which the rest of a lifetime will never efface."