A new prison for women opened on the Boggo Road reserve in 1982. The number of female inmates had been increasing in recent years (receptions for 1981 totalled 347), leading to overcrowding problems.

The new Female Division had accommodation for 73 inmates, but by 1986 the prison was already operating over capacity, with the average daily number of inmates being 76. Although a women's unit opened in Townsville in 1988, this daily average for Brisbane reached 84 that same year.

Labour included bookbinding work for the State Archives, and tailoring (sheets, pillows, tea towels and sweat shirts), and there was also a vegetable garden, a mini-orchard, and later a plant nursery.

Gallery: Scenes from the Female Division 1982-99 (click to enlarge images) 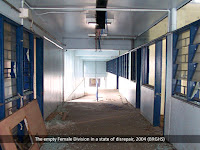 This prison was renamed as the 'Brisbane Women's Correctional Centre' in 1990. Corrective Services granted female inmates 'special needs' status in 1992, allowing them access to women's health services and counselling for domestic violence and issues. A few years earlier some women had also been allowed to keep young children with them in custody.

The Female Division at Boggo Road closed in August 1999 after a new Brisbane Women's Correctional Centre opened at Wacol during the previous month. The inmates were transferred to the new prison, and although their old home was only 17 years old it was left to deteriorate before being demolished circa 2005.