The Archaeology of Boggo Road

In 2005, Austral Archaeology conducted an archaeological survey on the site of the former No.1 Division as part of the preparation for the planned ‘Boggo Road Urban Village’ development. There were a few potential points of interest, including the original underground punishment cells of A Wing; a rumoured burial site near the eastern boundary; a tunnel joining the two prison divisions; and an underground water tank. No traces of unmarked graves or the dark cells were found, possibly due to disruption by previous construction and demolition work during previous decades (although these may simply have been 'missed' by the test trenches). The archaeological team did, however, manage to find the tunnel and the tank. 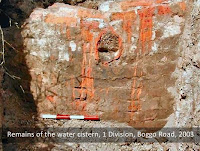 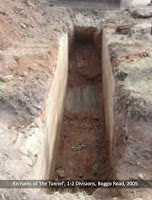 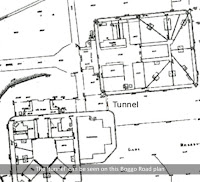 The Tunnel
When the new workshops off the east wall of No.2 Division were built in 1929, an underground tunnel was also constructed. This allowed prisoners to be securely transferred between divisions. The roof of this tunnel was removed during 1970s construction work and the tunnel was filled with rubble. The archaeological survey located the tunnel, which was fairly well preserved, but it was decided that tunnel was not historically significant enough to warrant preservation.

The Water Tank
Much of the water for the old No.1 Division was originally provided by an underground water tank, constructed with the gaol in 1883. It was dome-shaped, made of red brick, and was just over 3 meters in diameter. The water tank was in the centre of the No.1 Division quadrangle and surrounded by landscaping. The roof of this structure was damaged in the 1970s during construction work on the new No.1 Division. As with the tunnel, this tank did not survive the subsequent redevelopment work.