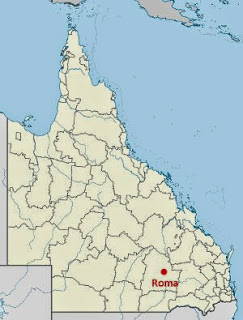 As the colony of Queensland continued to expand after the boom of the 1860s, the reach of British law extended further inland. The Maranoa region of the Western Downs was opened for pastoralists and the site of Roma was first surveyed in the early 1860s. By 1866 it was the major administrative centre of the Maranoa and had a police station and a courthouse, so a prison was not long coming.

Built by T. Slaughter, the ‘Public Gaol, Prison and House of Correction’ opened in December 1872 on the corner of May and McDowell Streets. It became known locally as ‘Donnelly’s Hotel’, after Peter Donnelly, the first superintendent. The prison initially had capacity for 24 prisoners, with 8 separate cells and the rest confined in a common ward. The 1¼ acre grounds were surrounded by a 4-metre-tall hardwood stockade fence, and the early yards were not graveled but were instead ‘muddy and boggy’.

The most common crimes in the gaol register were reported to be forgery, false pretences, and cattle or horse theft. Among the inmates held there was the notorious cattle thief Harry Redford. Sadly, as was this case with many other colonial prisons, people with severe mental health issues were also confined in the cells on occasion.


By the 1890s the buildings were decaying and required constant patching up. These were probably the prison’s busiest days thanks to the Shearer’s Strike. The prison was expanded with a couple of new cells and another ward to increase the capacity to 38 inmates, both male and female.


The hard labour regime of the 1890s saw gangs of prisoners in the ‘broad arrow’ clothing on the roads pulling carts to a creek for sand. Local residents protested that the sight not only had a bad influence on children, but it was unnecessary degradation of the prisoners. Hard labour was then switched to woodcutting.

The prison closed in October 1903 and became a police gaol, meaning that only prisoners serving sentences of 30 days or less could be held there. It served in this capacity until 1923, when it was demolished as an ‘eyesore’.


'THE LAST OF ROMA GAOL.
An old landmark - and at the same time an eyesore - of Roma is to be demolished; tenders having been invited by the Works Department for the purchase and removal of the old gaol which for over 50 years has served as a place of detention for prisoners under-going sentences up to one year with hard labour. In 1903 it ceased to be a prison and became merely a police gaol, and a few months ago a proclamation in the Government Gazette closed the gaol and ordered that any prisoners detained there should be transferred to Brisbane now the buildings, which for many years have been in a dilapidated condition, are to disappear, to the great satisfaction of the residents, who for long have regarded them as a blemish to the town. The gaol, although having nothing to commend it from the artistic point of view, was very solidly constructed, both the cells and the stockade being surrounded by rows of logs sunk vertically in the ground in order to prevent prisoners digging their way out. The "hard labour," which latterly was confined to sawing fire-wood (disposed of to the residents), was performed within the stockade, although at one time, under the regime of a sub-inspector largely imbued with economic ideas, the prisoners were employed on various jobs outside. The residents however, took exception to the exposure of the branded prisoners to the public view, and particularly to the view of the children of the town, and the practice was discontinued.'