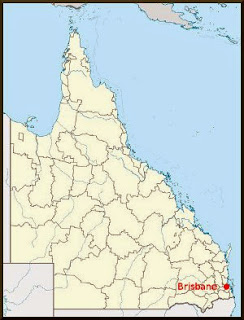 Brisbane's Queen Street prison of the 1850s was constantly criticised as it was never really up to the job, so it was no surprise that the first public building to open after Queensland became a separate colony was a new prison. The new 'Public Gaol, Prison, and House of Correction' on Petrie Terrace (back then known as Green Hills) was proclaimed in September 1860 and was a source of considerable local pride. In those days a new, modern prison was something of a status symbol (the population of Ipswich had lobbied hard to have it built in their own town), and the building was one of several that marked Brisbane's rapid transition from frontier outpost to capital seat of a colony. However, while the prison was more modern and lasted longer than its predecessor, it soon struggled to meet the demands of a growing population (as has been the case with almost every Brisbane prison ever since).

The buildings
The prison was built of stone and brick and was initially surrounded by a tall wooden paling fence, which was soon replaced with a stronger stone wall. It cost about £26,000, much more than the measly £800 that had been allocated to prepare the Queen Street gaol just ten years beforehand. There were two main cellblocks, each one being three stories high and separated into two sections to make a total of four wings. Each wing contained 36 cells arranged back-to-back, and the cells opened onto external balconies with iron railings and external staircases. The separate cells were designed to keep the inmates apart at night and avoid the discipline and classification problems experienced at Queen Street. Each cell was 7’ 2” wide and 8’ 7” long, significantly smaller than the 10’ by 10’ recommended as being the smallest size admissible for the good health of prisoners back in England. The prisoners spent a lot of time in these cells, being allocated 13½ hours for sleeping in winter, and 13 hours during summer.

One cellblock was set aside for male prisoners, while the male ‘lunatics’ and the female prisoners took up one half each of the other cellblock. Female lunatics were housed with the general female population. After the transfer of all female inmates to Toowoomba in 1870, and the opening of the Woogaroo Asylum, the wings were all used for male prisoners. Each wing had its own yard, and later there was also a hospital, workshop buildings (tailoring, bootmaking, tinsmithing, netmaking and leatherwork) and a debtor’s ward on the site.

The original plan was to build a larger prison with five wings at a cost of some £100,000. This never happened and plans to extend the gaol in the late 1860s came to nothing as a new prison had been built over on Saint Helena Island.

Underground cells?
There has been some confusion regarding the existence of underground solitary confinement cells at the prison. John Stanley James, a journalist known as the 'Vagabond', wrote a detailed account of a visit to these cells in 1877. He claimed that there were two 'dark cells', located in a sunken building in one of the yards and accessed by walking down a dozen steps. The cells measured 9 feet by 5 feet and were empty except for a can of water and boards on stretchers that served as beds. The floors were cemented, and the walls were made of thick stone with a small ventilation shaft at the top, making them very hot in summer. They were completely dark and prisoners serving more than one day in these cells were let out just once a day for an hour’s exercise.

However, an archaeological dig at the site in 2006 found no evidence of these cells, and there is no reference to them in other records. Did they exist? The best evidence suggests not, so perhaps James' report was the result of a 'vivid imagination'. I have written here before on the pervasiveness nature of stories about unseen underground tunnels and cells in local folklore.


The condemned cells
We do know that there were condemned cells at the prison, because 26 men were hanged there. These cells were in the end yard next to the male hospital, and opened onto the yard normally used for confines and juveniles to exercise in. It is possible that in later years some ground-floor cells in one of the wings were also used to hold prisoners under sentence of death. The condemned cells were much like the others, except that they had outer iron doors. When needed, the gallows were also erected in this yard, but their height allowed curious people outside to see over the wall and watch a hanging. It has been said that when hangings were due to take place, the local children were sent to play at the bottom of their gardens, safely out of view of the events taking place in the gaol yard.

Conditions at Petrie Terrace
Overcrowding soon became as much of a problem at Petrie Terrace as it had been at the older Queen Street gaol. The visiting surgeon was concerned that such a crowded gaol would lead to an increase in serious diseases, and the whole situation lent urgency to the move to erect the lunatic asylum at Woogaroo, which eventually opened in 1864. Later in the decade it also saw the opening of the gaols at Toowoomba and Rockhampton and the use of the ship Proserpine as a prison hulk, which was moored at Fort Lytton and received 104 prisoners during 1864.

Queensland’s first set of prison regulations were issued in April 1864, and they provided for the separation of the prisoners into six classes. The gaol at Petrie Terrace, however, was too small to enable this and it was to be some time before the classification of prisoners was practical in the colony. In his 1862 report, the Registrar-General noted that:

“I need hardly point out... how utterly futile it is to make any attempt at the proper classification of the prisoners – young and old, the thrice-convicted felon and the lad guilty of robbing an orchard, the murderer, and the servant who has broken his agreement, are all huddled together; reformation is, I fear, under such circumstances, past hoping for.”

Although conditions were thought to be worse at St Helena Island, there were several factors that made Petrie Terrace unhealthy. In 1868, Dr William Hobbs, the visiting surgeon at the gaol, claimed that the ventilation at the gaol was “very imperfect”, especially in the hot climate, and the high gaol walls prevented air circulation. He also noted that the cellblocks were facing the wrong way and received too much sun, making them unbearably hot in summer. He thought that the main cause of sickness at the gaol arose from “the derangement of the digestive organs from want of exercise and from the superabundance of food that the prisoners are allowed”.

Who were the Petrie Terrace prisoners?
The gaol was originally designed to hold both sexes, with individual room for 108 male and 36 female prisoners. Before 1867, the year that the penal establishment at St Helena Island was in full operation, the Petrie Terrace received an average of just over 600 prisoners per year. Of these, 10-15% were women, while 5-10% were classed as ‘lunatics’. From 1870 on, all female prisoners were sent to the gaol in Toowoomba. The oldest woman ever held at Petrie Terrace was 76 years old and was convicted of stealing clothes. The youngest was only 11 and was sent there for stealing poultry. The oldest male prisoner was 96 and was convicted of vagrancy, while the youngest male was sentenced for stealing money from a till when he was just ten years old.

After 1870 the average number of prisoners per year dropped to under 500, and with a daily average that was just less than the capacity of the gaol it soon became clear that a new gaol would be required.

The staff
It was not only the prisoners who found life at the gaol difficult. The staff made a public comment about their conditions in July 1863, when they presented a petition to Parliament asking for more money, so that in the case of “debility or infirmity” they could receive medical attendance and medicine. Moreover, they complained of fatigue after working long shifts, often at night. Sundays were dreadful days when they could not go to the pub (old turnkeys rule – do not frequent places where you might meet some of your recent ‘guests’), and visits to church often ended in sleep because in “the hallowed precincts of a place of worship, the fatigue of the body, through the length of time on duty, and more especially at night, overpowers inclination, and shrouds it in unconquerable drowsiness”. It was signed by 14 men, describing themselves as “the Turnkeys of Her Majesty’s Gaol, and Warders of the Lunatic Asylum, Brisbane”.

One visitor to the gaol in 1876 was a reporter for The Week, who presented a somewhat rosier picture of life inside:

“One of the most noticeable features in connection with the gaol is the air of cleanliness and neatness which pervades the whole establishment. Every prisoner admitted has a bath and a shave, and those who intend to partake of [the chief Gaoler’s] hospitality for any length of time are supplied with a suit of clean clothes, and during their detention all the prisoners are obliged to take a bath at least once a week; but in this matter they do not need much pressing, as it rarely happens that the prisoners’ ablutions are confined to the minimum enjoined by the rules of the establishment. Shower baths are to be seen in all directions. In pleasing contrast to the ever-present massive masonry, I was glad to perceive that every available spot of ground had been utilised for the planting of flowers, and fruit and shade trees, the latter proving a very welcome shelter to the prisoners in their leisure hours.” (The Week, 18 November 1876)

As with the Queen Street gaol before it, the Petrie Terrace facility soon became obsolete, and demolition began in 1881 as a new gaol was constructed on Boggo Road, South Brisbane. All the prisoners were transferred to that establishment in July 1883.