The following is based on a letter received from a former prison superintendent. He was writing after two tragic events in 2012 - a devastating prison fire in Honduras, and the death of his former colleague Geoff Grant. He recalled the events that took place during a riot at Boggo Road in late 1986: 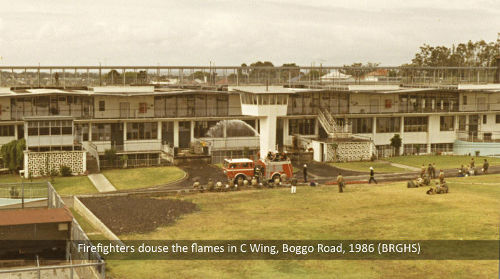 'As the world’s media attention continues to focus on the tragic loss of 350 prisoners, who were abandoned by those responsible for their lawful confinement and safety, the most recent focus is concentrated upon the official who fled the prison, leaving the confined prisoners to suffocate or burn.

It is therefore now appropriate to reflect on the performance of several Queensland prison officers who responded with courage and commitment when confronted with a similar situation at Boggo Road Prison in 1986 when a widespread riot occurred at that prison.

It is timely to reflect that on the 22nd of February former officer Geoff Grant passed away without any recognition ever being afforded for his devotion to duty and courage to act, without question, during the 1986 riot.

At the time of the riot prisoners set fires in the kitchen, prisoners mess and adjacent areas and the acting superintendent at the time concluded that control of the prison had been lost to the prisoners and he called on the acting Commissioner of Police to deploy his officers to secure the perimeter and withdrew the prison officers from within the prison.

The officers manning the towers remained on their posts whilst four other officers remained within the prison to be in charge of the chief officer’s office and to prevent prisoner access to the key safes.

By this time the fire brigade personnel had arrived and starting to control the fires from the exterior of the prison walls. It was apparent the prisoners, some of whom had been locked in their cells immediately above the fires, were starting to panic because the heat and smoke was now close to them.

Two officers, namely Geoff Grant and John Collins, a medical/security officer, were asked by me if they were prepared to enter the danger zone and release those prisoners, who were in peril, from their cells.

It was then noted that prison officer Mick Kindness, officer in charge of H Wing, had remained at his post and so officers Grant and Collins were instructed to escort the endangered prisoners from C Wing to H Wing, where they were then locked in safe and secure cell accommodation.

I have made numerous attempts to have the bravery of the three officers mentioned recognised, but on each of those occasions my attempts have been frustrated, apparently because those then being in charge of the Queensland Prison Service lacked any appreciation of the incident. It was only on the return of Comptroller-General of Prison, Alex Lobban, to duty that a semblance of honesty prevailed.

Mr Lobban sent a letter of appreciation to those officers whom I had nominated for state awards, as well as those officers who had remained in the prison to safeguard the keys. Mr Lobban was apologetic that he was unable to redress what was in fact an incompetent, negative and self-serving report prepared by a then assistant to the Director-General of the department. Throughout and following upon the incident I found the then Acting Commissioner of Police to be a most honest and supportive individual and I believe that if justice is to prevail even in death, may Geoff Grant and survivors John Collins and Mick Kindness yet receive the recognition per medium of an uncompromised and honest investigation.'

(Another former officer added the following notes shortly after reading this article):

'During the 1986 riot the first to officers to get the master key and release the prisoners from the cages in C Wing were good mates the late Geoff Grant and one Cyril Cairns, check the TV footage then were later joined by J Collins.'