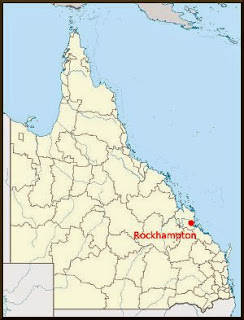 This prison was officially proclaimed open on 29 March 1864, making Rockhampton the second town in Queensland (after Brisbane) to have such a facility. Prior to the building opening as a prison (on a triangular piece of land bounded by South and Murray streets) it was used to house victims of severe floods in the area. Unlike the one at Petrie Terrace, this prison was based on the discredited ‘associated system’, whereby inmates were housed in large communal wards instead of separate cells. As was said in the Rockhampton Bulletin, ‘is this not an admirable school for crime, where graduates are instructed by the great masters?’


“There are at present about 40 prisoners in the gaol, the number including one female; but there is proper accommodation for only 30 – viz. 12 in each of the two association wards, instead of 18, as at present, and there are six single cells. The latter, however, are not all available, as one of the cells, small, and close as an oven, is used as a guard-room, while two are set apart for the cooks, and two for female confines – a magnificent suite of apartments, truly. There is just one cell vacant.” (The Bulletin [Rockhampton], 7 April 1877)

The vacant cell was the condemned cell, which had its own private but very small yard. Seven men were executed at the prison, all of them during 1868-75.


In the late 1870s the prison was in poor repair and being heavily criticised in the local press:


“The site is bad. The building stands on a mud flat, the foundations have yielded, and the brick walls show several fissures, two of which extend from top to bottom, while one permits the daylight to pass through, and would afford capital loopholes for a garrison. But for their wooden supports, the walls would have crumbled to pieces long ago. Then, the large door is rotten. If reports be correct, a panel fell out on one occasion; and the patchwork is conspicuous, a thin piece of wood figuring transversely in one place, and a bit of tin in another, while decayed portions of the original door could be pulled off by the hand. A few blows from a sledge hammer would send the whole thing to pieces. This may do very well here, but the “boys” of the “Far West” would only laugh at such a barrier, and certainly King Lynch wouldn’t stand it a day. Further, there is no inner gate, a fact requiring no comment. All this insecurity necessarily throws additional work on the warders, who have thus to be excessively vigilant.” (The Bulletin [Rockhampton], 7 April 1877)

This decaying building was closed when a new prison, known locally as the ‘North Street Gaol’, opened in 1884. No known photographs of the first facility have survived.