What was the first gaol in Brisbane or Queensland? Well, officially it was Brisbane's Queen Street gaol that opened in early 1850, but various buildings had been used to confine unruly convicts since the days of the Moreton Bay penal settlement in the 1820s. None of these earlier facilities were ever officially proclaimed as a gaol, but they were known as ‘gaol rooms’ and ‘solitary cells’ and as such can be considered as the first purpose-built incarceration facilities in the region.

The first of these structures was located in what was to become Queen Street, near the top of the present-day mall. The need for a gaol to hold unruly convicts had been recognised in the earliest days of the convict settlement, where discipline was considered especially important as they were places of secondary punishment for transported convicts who had reoffended since arrival in Australia. One of the reasons that the infamous Captain Patrick Logan relied so much on flogging as a form of punishment at Moreton Bay was the lack of alternatives, such as adequate incarceration facilities or a hard labour treadmill (although one was built in later years). Of course, when a convict refuses to work, hard labour is not an option anyway.


The records concerning the construction of these buildings are incomplete, but the cells and gaol room were probably constructed during 1827 under the supervision of Logan, and apparently without authorisation from the colonial government in Sydney. There were 16 solitary cells, built from rough stone and measuring 7 feet and 9 nine inches long by just 2 feet and 2 inches wide. There was a small ventilation opening over each door, and while the cells would have been uncomfortable at the best of times, they would have been especially unbearable in summer. They were used to hold particularly troublesome convicts, as well as those due to be returned to Sydney to face trial on serious charges. One Aboriginal prisoner, Bingi Mhulti, was held in one of these tiny cells for several months while an unsuccessful search was made for an interpreter for his murder trial.

The gaol room closed in late 1828 when a similar facility was built into the ground floor of the south wing of the new convict barracks. The original gaol room was later used to house married soldiers. 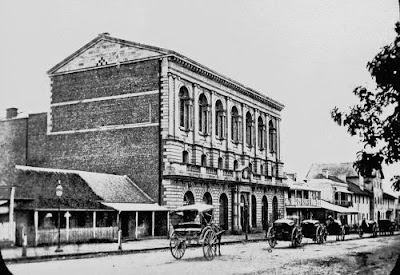