One of the features of No.2 Division that always attracted keen interest from museum visitors was the cell graffiti, but all is not what it seems with those scribblings.

Boggo Road prisoners were not allowed to write on or deface their cell walls, and any graffiti was quickly removed, but when No.2 Division was facing closure in 1989 this became less of an issue and some graffiti was left in place. 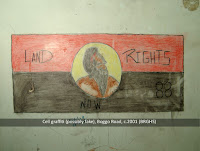 The messages are varied. There are complaints and threats about the prison system and specific officers; affectionate declarations about loved ones; political and racial statements; and attempts at art. While this might have been a valuable anthropological record of the last weeks of No.2 Division, the problem is that most of it has been identified by former prison officers as 'fake': it was not put there by actual prisoners.

What happened was, around the year 2000, a small business to host occasional 'sleepovers', in which customers spent the night in cells. Unfortunately these events were poorly supervised and a number of customers would drink alcohol in the cells, burn candles, and write or draw on the walls, often pretending to be prisoners. Some of this graffiti was quite elaborate but it damaged the integrity of the genuine graffiti because new visitors were unable to differentiate which was which (a 2002 conservation analysis by Blake and Riddel also noted this fact). There have also been cases of more recent visitors writing on cell walls.

The heritage damage caused by these sleepovers is part of the reason that they were eventually prohibited by government.

Most of the graffiti is now facing removal with the planned refurbishment of the prison. The

D Wing cells have lead-based paint which is flaking off in significant amounts, posing a health and safety hazard. However, extensive photographic records of the surviving graffiti - both genuine and fake - have been created.