In July 1966 officer Bernard Ralph was senselessly killed by prisoner John Hobson in the bootshop at Boggo Road. Hobson was a former Westbrook Reformatory School boy with mental health issues who was serving life without parole for the triple murder of a farmer, his wife, and a teenage girl. 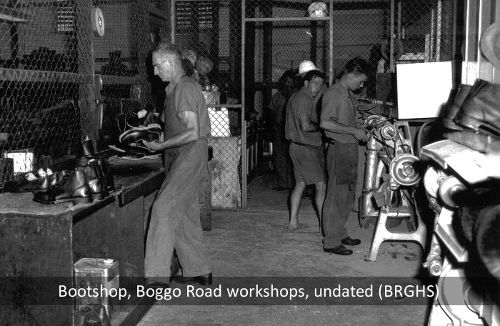 The following account is adapted from a manuscript by a former prisoner:

'In the bootshop I knew a number of the lifers, and Boots Hobson was a big country boy who was suffering with his triple life sentence, and he often came to me for my opinion or advice. Boots’ problems grew daily when the instructor went on his long service leave and a rotation of warders began to take turns giving orders to the bootshop inmates. These snappish warders came from the main pool in One Division and many were the Wacol-trained and hoping to prove their courage and personal mettle.

Boots spoke many times of the warders who were riding him and I told him to pretend to be sick with the flu and to stay inside his cell until the new influx settled down. He did this and it seemed to work, and later that week he went happily on back to work. When the extempore warders again singled him out for attention, he put his thumb under the boot press and he pressed the lever. His thumb flattened out like a shoe sole and I watched him while I stood on a sewing table, gawking at his action. Boots grinned at me as warders hurriedly took him to One Division to be transferred to the hospital to have his thumb amputated.

Nobby Clarke was the workshop instructor. It was mostly a workshop for lifers and long termers and to my memory Nobby handled the men calmly and decently. In 1966 Nobby was on leave for three or more months, and Officer Bernard Ralph took over as bootshop officer. Ralph was a disciplinarian in his late fifties, and the rumbling and grumbling by prisoners should have told the administration that he should not have been locked behind the mesh partitions with men who repelled ongoing orders and directions. Boots Hobson, as it was freshly relayed to me, had been disciplined and warned by Ralph.

Bernard Ralph was sitting in this alcove having his morning tea and Boots Hobson calmly walked to the buffing machine, removed the thick bar used as a lever to raise or lower the spinning brushes, then walked up behind P.O. Ralph and crashed it into his skull. He fell from his chair onto the floor and Boots took a portion of his morning tea and went back to his bench and began working. Only two prisoners witnessed the attack and said nothing at that time. One was Robert ‘Bobby’ Moore. The guard on the catwalk did not see it happen and a prisoner approached the alcove, or ‘office’ and saw Mr. Ralph prostrate on the floor. The lad involuntary called out and the armed guard on the catwalk then saw the scene and pointed his gun at the young man and threatened to shoot him. Guards came from every where and the bootshop prisoners were escorted one by one to their cells in Two Division. Boots was taken under escort to his cell, after a prisoner said that Boots had been named by other prisoners as the person who had killed Mr. Ralph. All the other workshop prisoners were locked in their cells and officer ___ ___ and other unnamed officers allegedly called for the bashing and castration of the men in the cells. Prisoners then began to barricade their cells but cooler heads prevailed when Mr. Hogan, Mr. Kearney, Jim Kelleher, Bill Brooks and other sensible older officers stood in front of the angry officers and calmed them down. I arrived back at the gaol some weeks after the event and this was the mostly corroborated information that was spoken at that time.'

Apparently, Hobson did not escape the wrath of some officers for long, and was bashed in his cell. He was later transferred to a secure mental health facility, and died of a massive heart attack in Boggo Road some 20 years later.