‘BOGGO ROAD RIOTS!’ Three little words that conjure up images of prisoners on roofs, protesters in the street, fire engines, smashed windows, phalanxes of riot squads, and burning cells. Scenes that put Boggo Road in the newspapers several times during the 1970s and ‘80s. However, the Roaring ‘Twenties had their fair share of violent resistance to authority at the prison too.

Back in 1921 the female prisoners were moved out of their under-populated cellblocks in the Women’s Prison at Boggo Road and housed in a smaller building on the reserve. Their former home was quickly filled with a quite different type of prisoner, being men serving long sentences and transferred to the prison from St Helena Island in Moreton Bay. The former Female Division became No.2 Division, in effect a maximum-security prison for the worst offenders in the system. 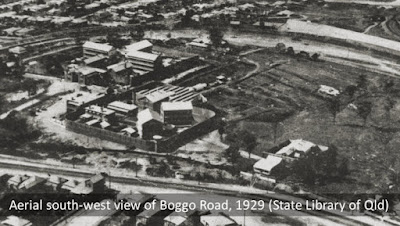 Trouble flared up one morning a few months later when the inmates asked to have shutters removed from the windows of what is now F Wing. The gaol governor refused, fearing that if the shutters were removed then the prisoners would be able to communicate to people outside on Annerley Road. After lunch that day the 78 prisoners were mustered to return to the workshops but about 30 of them, described as ‘old-timers and Southern criminals’, refused to go. They were on strike. The recalcitrant prisoners were each locked in their cells, and continued to refuse to work. That evening they began shouting and singing, alerting the public outside that something was wrong. The next day a visiting magistrate came to Boggo Road and increased the sentence of each striker, and all the men returned to work.

An escape incident in 1923, coupled with a stabbing and rumours of 'other trouble caused by the prisoners' led to calls for staff reinforcements and an inquiry into the wisdom of transferring the long-termers over from St Helena. In 1925 the Home Secretary, James Stopford, had to admit that 'revolts are frequent in prisons, not only in Queensland but in other States'. This statement came after a string of incidents, including a late 1924 fight involving Boggo Road inmates that left one man badly wounded after being stabbed, another Boggo Road man holding a hunger strike, and a dozen men in Stewart Creek prison, Townsville, being charged with 'refusing to work, destruction of property, gross insubordination, assault on an officer, threatening prison officials, and obscene language'.

Worse was to come in June 1926. Trouble had been brewing in No.2 Division for months and discipline had reportedly become so lax that some long-timers would not follow some warders’ orders, instead answering them with ‘vile language’. During lunch hours they ‘danced to the music of a gramophone’ and resented any interference to their perceived rights. The warders feared that an outbreak of violence was inevitable.

It came one morning when over 20 prisoners in No.2 Division were being escorted into the prison bootshop. The officer in charge was Warder Simpson, described as the ‘bete noir of the prisoners because of his strict regard for prison rules’, and on this morning the body of prisoners savagely attacked him without warning. He was being ‘badly mauled’ and had to be rescued by warders Ralson and Dwyer, both of whom were also attacked with one of them ending up badly injured. The officers managed to get out of the bootshop while the inmates smashed the bootmaking equipment and threw it into the yard outside. The disturbance was suppressed when other officers arrived on the scene from No.1 Division, and the prisoners were escorted to their cells. 21 of them had their sentences prolonged by one to six months as a result of this ‘riot’. There was a brief flare-up again a few days later with men refusing to carry out some duties, but this was quickly dealt with.

In the aftermath of this incident public details emerged of a prison under strain. One ex-warder, interviewed in the Brisbane Courier, claimed that gaol discipline was ‘practically non-existent’ and that warders were sometimes reprimanded in front of the inmates for charging prisoners with misdemeanours. Staff unrest was rife, and unhappy warders were said to have resigned because of the perceived lack of discipline. He claimed that their firearms were obsolete and useless in an emergency, and that prisoners in the yard would without consequence throw stones at the sentries on the wall.

The same ex-warder claimed that a number of causes were behind the problems, including temporary warders who did not wear uniforms and did not have the required authority to lock prisoners up. these men were openly defied. Alcohol, specifically rum, was commonly drunk by the prisoners and it was initially suspected that warders were smuggling in alcohol after a tin supposedly containing treacle was found to be filled with rum. A search of warder’s bags turned nothing up, and it was concluded that the rum was coming in via visitors.

Several decades later, Boggo Road officers would also place some blame for the much bigger riots of the 1980s on the negative influence of ‘southern criminals’ and lax managerial attitudes. The more things change, the more they stay the same.